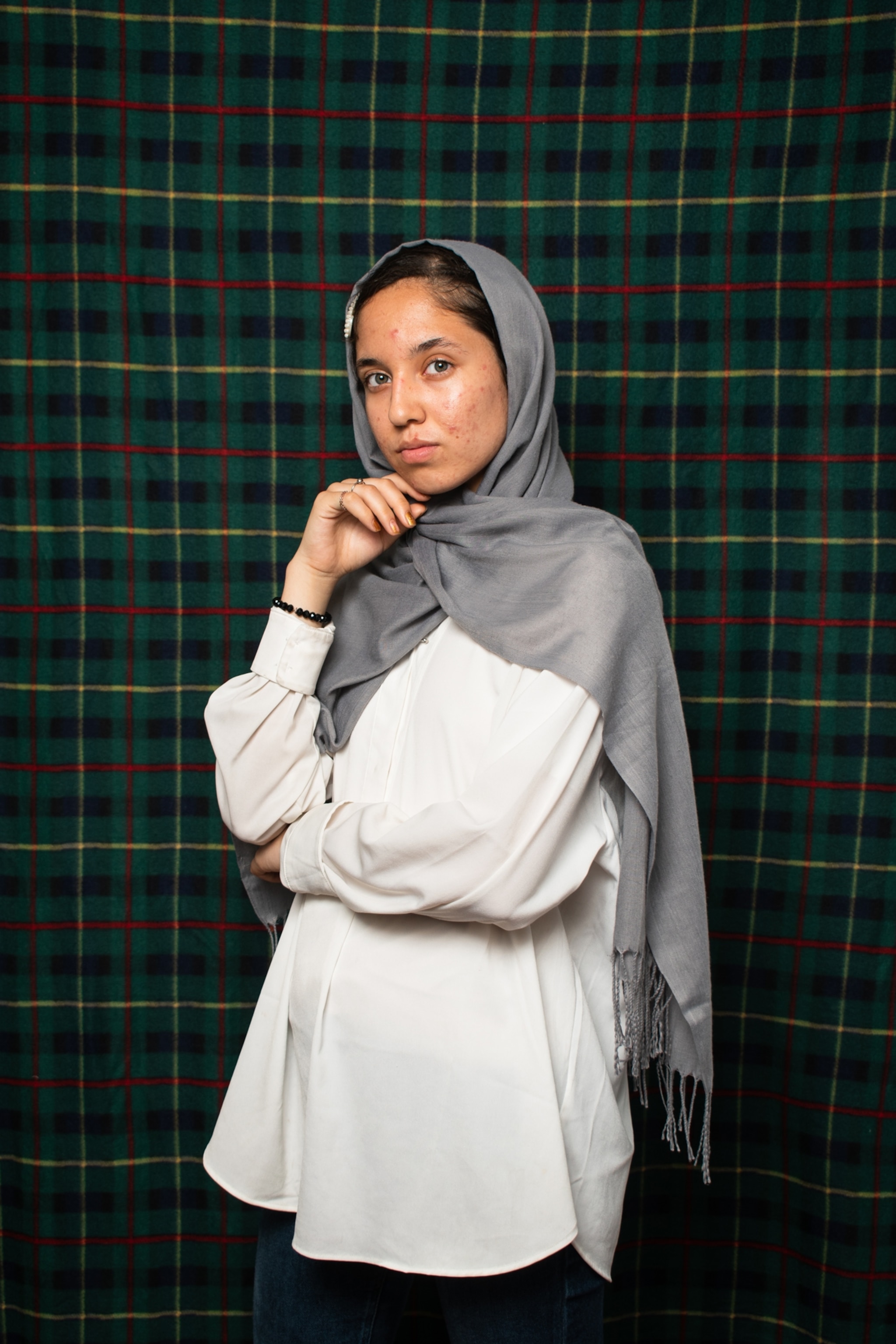 How can refugees bring their stories to the world? Give them a camera

Migrants in Greece share their harrowing and human experiences through photos and film.

“I always had this dream in my life—to be a girl who wears her hijab and plays soccer,” says Masomeh Hussaini, 15, from Afghanistan. But in Iran, where she spent most of her childhood, she wasn’t allowed to play. “My second dream was to become a neurosurgeon and treat my sister,” she continues. Two years ago, she and her family came to Europe to seek medical help for her younger sister. Her father had to carry his sick daughter throughout the journey, while her mother, pregnant with twins, suffered a miscarriage of one of the babies when their boat capsized. Now in Greece, she plays soccer every day but, she says, “when I am happy, I suddenly flash back to those memories. I can never forget them.” Her portrait, along with others in this story, was made by refugee Zahra Mojahed as part of a project called 1000 Dreams for the nonprofit Witness Change.

AthensMaliheh and Nahid Rezaei arrived by inflatable boat on the Greek island of Lesbos in 2018 with one backpack, two small travel blankets, two sets of clothes, and dreams of becoming actresses.

The 24-year-old Afghan twins ended up in the overcrowded Moria refugee camp, a place some aid workers likened to a prison before it burned down in 2020. Yet, within a year of being granted asylum in Greece, the women have helped produce a feature-length documentary, made their own short film, and starred in a movie based in part on their journey to Greece.

The Rezaeis are among dozens of refugees from across South Asia, the Middle East, and Africa who have learned photography and filmmaking through ReFOCUS Media Labs while waiting for asylum in Greece. Many of those students are now using cameras to speak out about problems in their home countries, tell the stories of other refugees, and empower women who’ve escaped oppression. (Afghan refugees are finding a warm welcome in small-town America.)

Please be respectful of copyright. Unauthorized use is prohibited.
Please be respectful of copyright. Unauthorized use is prohibited.
Left: Mohamad Bagher, 44, left Iran with his family after he was ousted from his IT job for being Afghan. They overcame many hurdles to reach Europe—climbing mountains, losing their savings to a smuggler, and nearly drowning at sea. "My daughter would tell me, 'Daddy, it is enough. Let's go back home,'" he says. "Unfortunately we had no other choice."
Right: Ali Ataei, 22, does not want to identify the country he and his brother fled. "I was worried," he explains. "The circumstances were extremely difficult." Their guide abandoned them and their boat nearly sank. But he doesn't remember many details: "I think I have somehow lost my memory of those days."

Of all the services they encountered on the island of Lesbos, ReFOCUS has “had the biggest impact… on our lives,” Nahid says.

Led by professional photographers and filmmakers from around the world, ReFOCUS courses have given students the ability to express themselves and share stories of struggle and resilience.

Many students go on to make their own films, and some work as freelance journalists, chronicling the migrant experience. Others remain with ReFOCUS to teach new waves of asylum seekers, who often struggle to find work in a foreign country where they do not speak the language.

“When I was little, it was my dream” to make movies, says Maliheh. “Now, I can.”

‘We want to show that women can do everything’

Douglas Herman left his job teaching high school film in Philadelphia in 2017 and co-founded ReFOCUS after realizing there were few opportunities on Lesbos for asylum seekers over the age of 12 to continue their education. The Moria camp, once dubbed “the worst refugee camp on earth” by a field coordinator for Doctors Without Borders, only offered basic language classes. (Why migrant teens face pressure not to go to school.)

The goal of the program was to improve migrants’ futures and give them a platform to tell stories, according to Herman, and his students soon began to do just that. “The second they knew how to use an audio recorder or a camera,” he says, “they immediately wanted to tell their own story or help someone else tell theirs.”

Among those storytellers were the Rezaei twins, who wore matching burgundy hijabs and beige shirts during an interview on a hot July night. Passing an iPhone back and forth, the young women, who grew up in Iran, translated words from Farsi to English as they discussed their recent work.

Maliheh pulled up a two-and-a-half-minute fictional film they made about an Afghan man who lost all his money gambling and gave away his daughter to pay his debts. The film, produced in 2019, was the twins’ first independent movie.

In addition to their short film, the twins finished a 10-minute documentary about refugee women from Afghanistan, Iran, and South Africa who continue to pursue their dreams in Greece. The film, called Speak Up Loud, features a yoga teacher, a Zumba dance instructor, a kickboxer, and a schoolteacher who translates books into English for her students. It was shown at an Athens film festival in December 2021.

Nahid says she made the movie to encourage other women from male-dominated cultures to break free from traditional roles. “They never stopped their dreams, their work, their job, their life,” Nahid says of the women featured in the film. “We want to show that women can do everything in the world.”

'They don’t know about us’

In 2019, ReFOCUS students helped produce a feature-length documentary called Even After Death, which examines the stories of migrants who didn’t survive the dangerous journey to Europe. The film was set to premiere at a film festival in the Netherlands before the coronavirus pandemic hit.

One of the producers of that movie was Zahra Mojahed, who fled Afghanistan with her family when she was five because of the Taliban’s persecution of the Hazara ethnic minority group. In Iran, they faced discrimination as well, and later sought asylum in Greece.

The 29-year-old arrived with her husband, Jawad Jafari, on Lesbos in April 2019. The pair were quickly drawn to photography through ReFOCUS.

Now Mojahed, whose photographs illustrate this story, is participating in 1000 Dreams, an exhibit through which refugees tell the stories of other migrants. She tracked down, photographed, and interviewed 70 migrants for the project, which is supported by Witness Change, a nonprofit founded by National Geographic Explorer and photographer Robin Hammond.

“Refugees have a lot of problems in Greece and [in] every country,” she says. People in host countries “don’t know about our problems, our journey, our problems in our country.”

“We have a lot of talented people,” she adds. “And they didn’t know about us.”

‘I have a lot of dreams’

About 89,000 refugees received international protection in Greece between January 2016 and May 2021, according to the country’s Ministry of Migration and Asylum.

Though migrant arrivals in Greece have slowed in recent months, data from the United Nations High Commissioner for Refugees show more than 8,100 migrants arrived in Greece between January and November 2021. Afghans made up about 30 percent of arrivals by sea—the most from any single country.

The Taliban takeover of Afghanistan last August brought more refugees with stories that ReFOCUS students have brought to life. Those who made it out are worried about family members still in Afghanistan, even as they continue to navigate difficult lives in Greece.

“I have a lot of dreams,” says Mojahed, who faces financial hardship with her husband as she awaits an asylum decision. “My dream is to be a photographer and filmmaker as an Afghan woman. And to show people and to show to girls and women in Afghanistan that women can do everything.”

For the Rezaei twins, their dreams of becoming actresses are second only to reuniting with their parents, whom they haven’t seen since their parents left Iran to seek asylum in Germany seven years ago.

The women, along with their older sister, live in a house in central Athens rented for them by award-winning Dutch film director Mijke de Jong, whose films often focus on women’s stories. When she met the sisters through ReFOCUS, she says she “immediately fell in love with them.”

“When I met them, they were sort of shy,” de Jong says of the twins, who star in her upcoming film about their lives. “Now, they are really powerful, and they really want to make films. It’s not me. It’s about them, and they can tell their own stories. It’s much more important.”

Lawrence Andrea reported on the refugee situation in Greece with support of the Pulitzer Center. He currently covers crime and public safety for the Indianapolis Star. Follow him on Twitter @lawrencegandrea.

Zahra Mojahed tells stories about the experiences of refugees, especially women, through her photography and filmmaking. You can follow her and other refugee storytellers on Instagram @1000dreams and @refocusmedialabs.