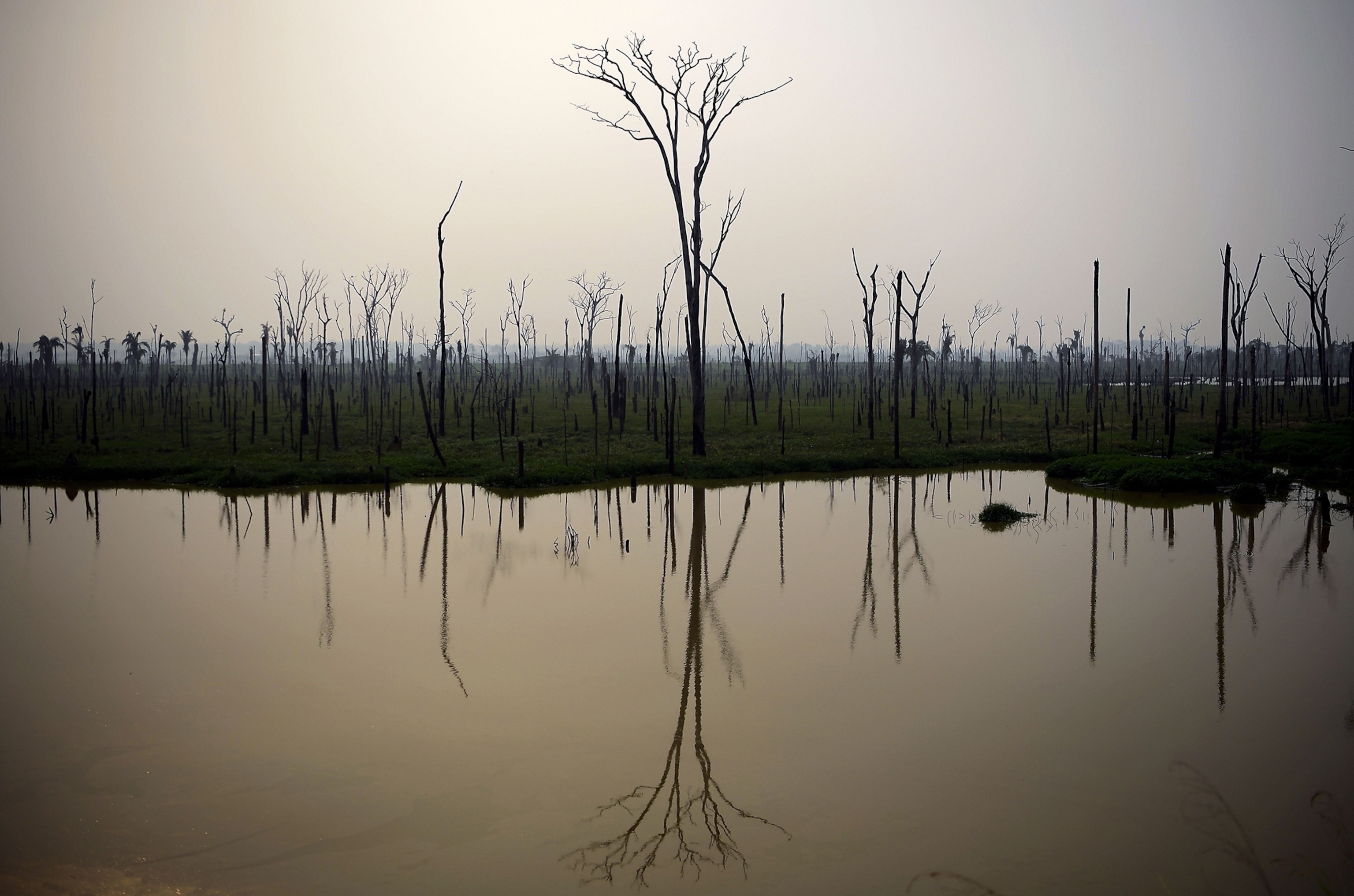 The fires burning through the Brazilian Amazon are a threat to the fish that rely on forest flooding to survive, raising fears the fish will be lost.

The Amazon rainforest in Brazil is still burning, as the scorched forest above shows, and experts now fear it could spread into and destroy the flooded forest habitat where hundreds of fish species live.
Photograph by Carl de Souza, AFP/Getty Images

MANAUS, Brazil — This year’s unusually severe fires in the Amazon have not only attracted widespread international attention, but also illuminated the effects of mounting deforestation in the region, from evaporating rains to rising carbon dioxide emissions. Yet one effect of forest loss in the Amazon has largely been ignored: how it influences the river system and the fish living in it.

There are few places in the world where aquatic and arboreal life are brought together as closely as they are in the Amazon. While the rainforest is home to the world’s largest river (by volume of water) and 1,700 tributaries, about one-sixth of the basin is also made up of largely forest-covered wetlands that flood for long periods each year and support the commercially most important fish in the region.

“This flood pulse is the driving force governing all the ecological functions and interactions along the river basin, and it creates flooded forests that are crucial for the survival and reproduction of hundreds of fish species in the Amazon,” says Jansen Zuanon, a fish biologist at the National Institute of Amazonian Research (INPA) in Manaus.

Although still pristine in much of the Amazon, the floodplain forests have in recent decades been heavily damaged in some parts of the basin, especially in the eastern lowlands of Brazil. Now, the threat to their survival—and the fish that rely on them—may be growing more intense because of increasing deforestation and fire, researchers say, warning that further degradation of the flooded forests could fundamentally alter the Amazon’s aquatic ecosystem.

“If we don’t protect these areas, the rivers will not be the same and we will lose the fish,” says Leandro Castello, a tropical ecologist at Virginia Tech’s Global Change Center, who has studied the links between forest and fish in the Amazon.

The Amazon basin, 60 percent of which is in Brazil, is the most biodiverse place in the world, not only on land but also in the water. There are more than 3,000 fish species in the Amazon, with at least hundreds more yet to be discovered. The biodiversity is attributed in large part to the flooding that occurs roughly from December to April. During that time water levels rise by as much as 50 feet, with water spilling over from the rivers to create new bodies of water in forested areas.

Despite its importance to the balance of the rainforest, the Amazon floodplain is relatively poorly studied, though the connection between forest and fish has long been established. Hundreds of fish species use the flooded forests to feed on fruits and seeds floating on the surface of the water, and on an abundance of plankton. Many fish also move into the flooded areas to seek shelter from predators, emerging from hiding once they have grown bigger.

While some studies have documented the relationship between deforestation and fish in small streams in the Amazon, less work has been done to assess the link in large rivers. For one study, published in 2017, Castello and others compared 12 years of fisheries data with satellite images of forest cover in a wide area of the lower Amazon River, and established a strong correlation between forest loss and fewer fish.

“We found that deforested areas matched with local fisheries producing much lower yields than those with larger forest areas surrounding them,” says Castello.

Significant links between forest cover and fish abundance were found for many of the Amazon’s most popular food fish, including the highly prized tambaqui, which can grow up to 70 pounds and has specialized teeth that can crush and grind hard fruits and nuts. Strong connections were also found for carnivorous species, such as the dourada catfish and surubim, which feed on schools of fish that live in the flooded forest.

In turn, those forests, which have adapted to survive being under water for months at a time, also benefit from fish dispersing seeds throughout the system.

“The result is a mutually-beneficial exchange of resources that fuels floodplain productivity and high biodiversity,” says Marcia Macedo, a Woods Hole Research Center ecologist who also works in the Amazon. “Without that land-water interaction, these tightly connected ecosystems begin to unravel.”

(Discover what the Amazon fires mean for other wild animals.)

The extent of forest loss on the Amazon floodplain is difficult to ascertain, but is higher in more populated parts in eastern Brazil. A study published this year in the journal Ecological Indicators analyzed deforestation in several areas along the main Amazon River floodplain since 1970. While a remote location in western Brazil had lost almost none of its flooded forest cover, a more populated area in the east had been 70 percent deforested, the study showed.

The issue of Amazonian deforestation has become highly politicized in Brazil. After the National Institute for Space Research (INPE) published preliminary data showing that overall deforestation in Brazil's portion of the rainforest increased 88 percent in June of this year compared with the same month a year ago, the director of INPE was fired by Brazilian President Jair Bolsonaro, who claimed the data was inaccurate. Yet INPE statistics clearly show a worrisome trend of escalating deforestation rates, which had started to drop in around 2005 before rebounding a few years ago.

While drought has often been a driver of forest fires in the Amazon in the past, experts say deforestation is the main cause of the unusually high number of fires—more than 90,000 so far—that have been burning across the Brazilian Amazon this year, as ranchers and farmers use fires to clear forest that has already been cut down to make room for cattle grazing and agriculture.

“These fires often escape into adjacent forest,” especially if it’s been logged, “burning the understory and beginning the process of forest degradation,” says Laura Hess at the University of California Santa Barbara, who has conducted several remote sensing studies in the Amazon.

While floodplains are less of a target for ranchers and farmers than upland forest, the woody vegetation found there may be more vulnerable to fire in the dry season because it is shorter and more open, and occurs in smaller patches. Floodplain forests on sandy soils, such as along the blackwater Rio Negro, are particularly vulnerable because the soil doesn't hold much water.

"The majority of papers and fire models for the region focus on upland forest. Floodplain forests are neglected. There is a huge gap in our understanding of fire impact on floodplain forests," says Paulo Brando, a tropical ecologist at the University of California Irvine.

To make matters worse, such forests are generally not able to recover once they’ve been removed. “A single floodplain fire can cause nearly 100 percent forest mortality, and often this vegetation will not grow back soon,” Brando says.

How much of the flooded forest has been lost this year, if any, is still impossible to judge, says Brando, but he adds that the height of the dry season has not yet reached the northern parts of the Amazon.

In the long term, scientists warn, droughts could become more severe and more frequent through climate change and deforestation, making it difficult to prevent a widespread conversion of floodplain forests into fire-dominated vegetation in the Amazon.

That scenario would have a devastating effect on most fish populations in the Amazon river system. “The fires and the deforestation in the Amazon add another threat to a river system that is already under major pressure from the building of new dams, mining, and other activities,” says Zeb Hogan, a fish biologist at the University of Nevada, Reno, and a National Geographic Explorer.

On the Machado River

Late last month, Hogan joined a team of Brazilian researchers on a journey down the Madeira River, the largest tributary of the Amazon. Setting off from Porto Velho, the capital of Rondônia state in western Brazil, they traveled to the Machado River, which joins the Madeira close to the city of Humaitá, and where the Brazilian government just announced it would go ahead with plans to build a large dam.

The Machado is important habitat for the dourada, the large and highly migratory catfish that feeds on fish in flooded forests. The river is also where the research to establish the connection between fish and forest in the Amazon was first carried out several decades ago.

Standing on the exposed sand bank of the Machado, Hogan listened to the team leader, Lisiane Hahn, a fish researcher at Neotropical, a Brazilian environmental consulting firm, describe the flood dynamics.

“Where we are standing now will be way under water in the rainy season,” Hahn said and pointed to the forest in the distance. “That will all be flooded.”

She added, “I guess you could say the river is the forest.”