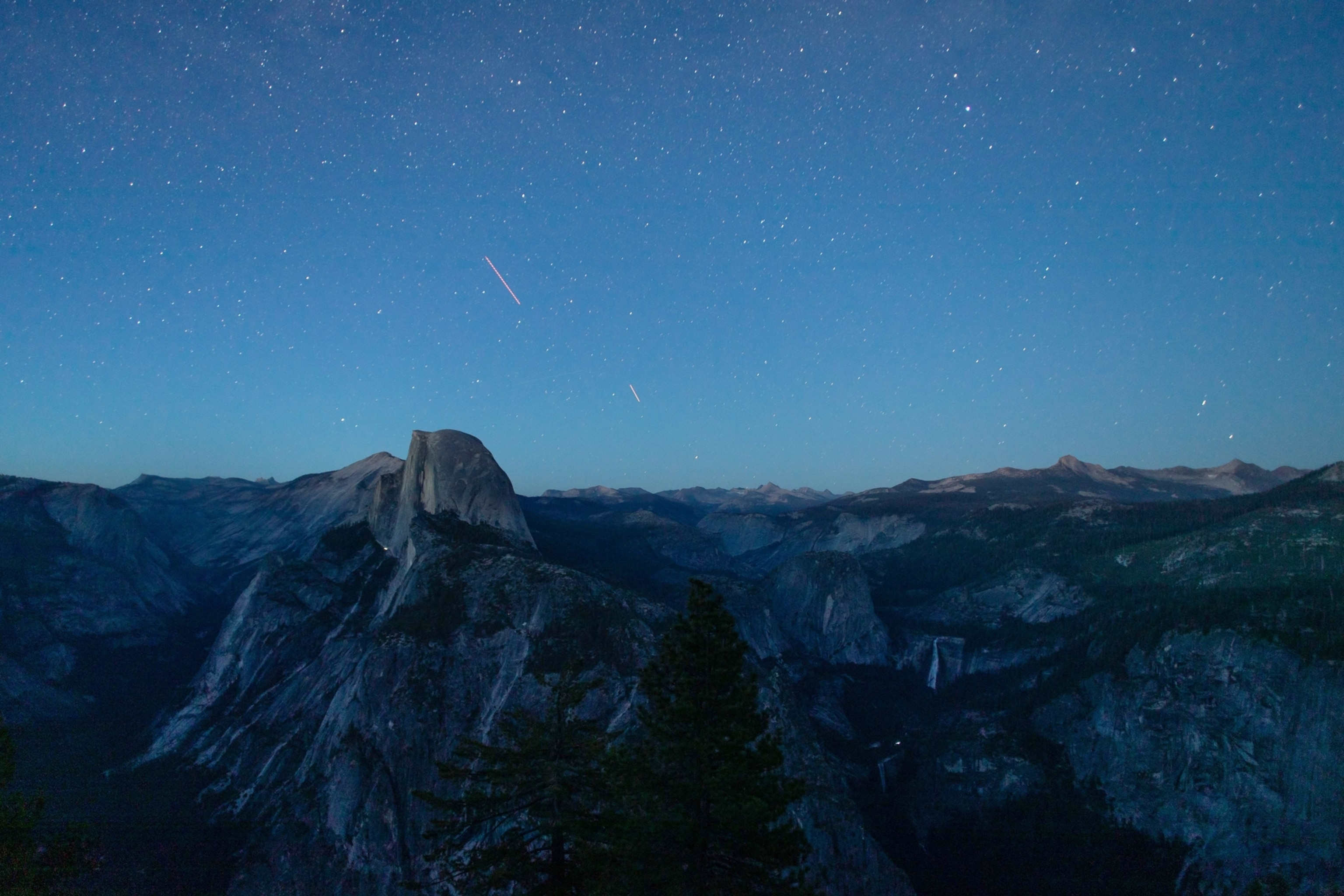 7 wins that gave us hope for the environment in 2020

From commitments to produce more electric vehicles to new marine protections, these trends may be a sign of good things to come.

Dusk falls over Yosemite Valley's natural attractions, including Half Dome (center left) and Nevada Fall (lower right) as stars begin to appear at Yosemite National Park on July 07, 2020. After COVID-19 forced the park to close for two and a half months, wildlife began to take over areas once used by visitors. The park is now open with limited services and facilities to those with reservations.

In 2020, wildfires raged through Australia and the American West, hurricanes battered Central America and the Gulf Coast, dark clouds of locusts descended on the Horn of Africa, and a new, deadly disease jumped from its wild animal host to humans, upending life as we knew it.

With end-of-world motifs dominating headlines, you wouldn’t be blamed for feeling like the natural world had turned a little hostile—even as scientists continued to warn of the dangerous harm we’re doing to it. Biodiversity is still in freefall, deforestation in the Amazon is on the rise, and a new report says plans to cut carbon emissions aren’t anywhere close to what they need to be to meet the modest targets of the Paris Climate Agreement—which, incidentally, the United States formally exited on November 4.

And yet, even in a tough year, good things happened. The Trump Administration may still be trying to sell oil leases in the Arctic National Wildlife Refuge, a pristine wilderness on Alaska’s North Slope, but it also denied a permit to the Pebble Mine in southern Alaska, effectively killing that controversial project.

More hopeful than individual news items, though, are some underlying trends. Public opinion on climate change continues to embrace the science, even in the United States, and young and once-marginalized voices are finally being heard. The private sector is seeing the profit in climate-smart investments. And some governments are seeing the opportunity, as they invest huge sums to recover from one of the worst economic downturns of the past century, of tackling climate change at the same time. Environmentalists are looking to the incoming Biden-Harris Administration to make climate change a major policy focus.

In these darkest hours of the pandemic there remains an undeniable sense of possibility. Here are seven developments and trends from 2020 that give us hope for 2021 and beyond.

This year, while we spent much of our time isolated inside, nature took on new significance as a place of refuge and entertainment. The passage of the Great American Outdoors Act in July was a reminder that protecting America’s national parks is something we can all agree on. Not since the 1950s had Congress agreed to spend so much money on national parks, many of which have long and expensive maintenance backlogs. The act also sets aside funds for forests, refuges, and future land purchases. All in all, the act awarded public lands nearly $10 billion. (Read more about the Great American Outdoors Act here.)

In the past decade, cars that run on electricity instead of gas have become more popular, thanks to technological improvements, lower prices, and government subsidies. In 2010, there were just 17,000 electric cars on the world’s roads. In 2019, there were an estimated 7.2 million, half of them in China. New government commitments made this year may help the rest of the world catch up. The United Kingdom announced it would ban the sale of new gasoline or diesel cars by 2030, and California said it would do so by 2035. (Norway still has the world’s most ambitious target, 2025—but it’s a much smaller market.)

Industry is responding. The world’s largest carmaker, German-owned Volkswagen, made perhaps the biggest financial commitment of 2020, saying it will spend $86 billion making greener cars over the next five years. General Motors will also spend billions on making electric vehicles. Amazon committed to rolling out 100,000 electric delivery vehicles by 2030, and the U.S. Postal Service may integrate electric vehicles into its next fleet of delivery trucks.

3. There’s sunlight at the end of the fossil fuel tunnel.

In early March, disputes between Russia and the massive oil cartel OPEC led to a glut of oil on the world market. By April, as the pandemic halted global travel seemingly in an instant, oil prices in Texas reached such historic lows that producers ran out of places to store their product. This slump piled onto existing market forces, prompting 36 oil companies, the most since 2016, to file for bankruptcy. Key pipeline projects such as the Keystone XL remained stalled this year.

While natural gas prices also fell to historic lows, consumption increased and displaced coal, which saw a 30 percent decline in output in the United States. (Forecasters caution that coal consumption could rebound in 2021.)

Globally, renewables are growing fast. In the first half of 2020, electricity generation by wind and solar rose by 14 percent and, for the first time, accounted for nearly 10 percent of all electricity. In the U.S. too, renewable energy output grew in 2020, increasing by about 5 percent from 2019. The U.S. installed a record number of wind and solar projects, thanks in part to an expiring tax credit.

To meet climate targets, experts say renewables need to grow at an even faster rate. President-elect Joe Biden has promised to encourage that.

4. Wall Street is feeling the heat.

Even before COVID-19, Larry Fink, CEO of BlackRock (the world’s largest money manager) warned that investors would have to reckon with climate change sooner rather than later. A report published in February showed that most of the more than 400 investors interviewed were weighing climate risks in their decision making.

In recent months, all six of the largest banks in the U.S.—think JPMorgan Chase, Bank of America, and Wells Fargo, among others—said they wouldn’t fund drilling in the Arctic National Wildlife Refuge, even as the lame duck Trump Administration tries to fast-track lease sales there. After lending trillions of dollars to the fossil fuel industry for years, JPMorgan Chase announced in October that it would invest in ways that help the world meet goals set by the Paris Climate Agreement. As Bloomberg reported last month, climate investing has even become trendy among the wealthy elite.

As Joe Biden prepares to take office, big banks are expecting more scrutiny about how their actions impact climate change. The president elect has said he’ll issue an executive order requiring publicly traded companies to disclose their emissions and how they may influence climate change. Last month, the U.K. announced it would require similar transparency.

5. Whales, long in need of saving, showed signs of recovery.

In the waters near South Georgia, just north of Antarctica, scientists spotted more blue whales than they had seen since before commercial whaling ended in the early 20th century. Fifty-five were spotted this year after 50 years in which sightings in the same waters were scarce.

Blue whales are the largest animals on Earth, and, according to the International Whaling Commission, were nearly hunted to extinction. They estimate nearly 300,000 were killed in the first half of the 20th century, as many as their estimated population before hunting began. Now there are an estimated 2,300 individuals in the Southern Hemisphere.

In the same waters, humpback whales have made a far more dramatic recovery, almost rebuilding their pre-hunting populations. Scientists see signs of hope for southern right whales too. (North Atlantic right whales are a sadder story.)

Most countries abide by the International Whaling Commission’s ban on hunting whales, but at the beginning of this year, Japan, Norway, and Iceland still engaged in the practice. However, in early May, Iceland signalled that its few whaling companies may soon shutter, giving anti-whaling activists hope that the world may soon hunt its last whale.

6.The ocean is getting attention.

Last week, 14 nations announced that they would sustainably manage 100 percent of their coastal waters by 2025, protecting an area of the ocean totalling roughly the size of Africa. Each country vowed to combat overfishing, invest in reducing pollution, and set aside 30 percent of its national waters as marine protected areas by 2030. Participating countries include Canada and Mexico, Japan and Australia, Kenya and Ghana, and Norway and Portugal. Combined, they comprise 40 percent of the world’s coastlines.

The U.K., while not a party to that agreement, announced in early November that, globally, the country is protecting 2.7 million square miles of ocean. Its latest marine protection zone is 260,000 square miles of pristine waters around the remote British territory Tristan da Cunha, a group of islands in the south Atlantic Ocean.

7. The world catches a glimpse of a cleaner world.

Call it the “anthropause”—that’s the name scientists have given to the global lapse in human activity when COVID-19 began its march around the world and forced us to stay put. In March, air travel dropped to 50 percent of what it had been in March 2019, the largest decline in recent history, according to the International Air Transport Association. Vehicular traffic in the U.S. and many other countries fell sharply. Parts of India normally blanketed by air pollution reported being able to see the Himalayas for the first time.

“Nature is healing!” the world exclaimed. (Though the phrase soon became an internet joke.)

While a global pandemic that sickened millions and destroyed livelihoods is certainly not the way to make the planet healthier for us to live on, it showed us what was in reach with ambitious, decisive action.

The pandemic also gave scientists an unprecedented opportunity: the chance to study ecosystems devoid of humans, a control against which human impact could be more precisely assessed. Even oceans went quiet, giving marine life a reprieve from human-generated noise.

For more sources of inspiration, see the 10 scientific discoveries and the 10 wins for wildlife you may have missed this year.

Craig Welch contributed to this report.