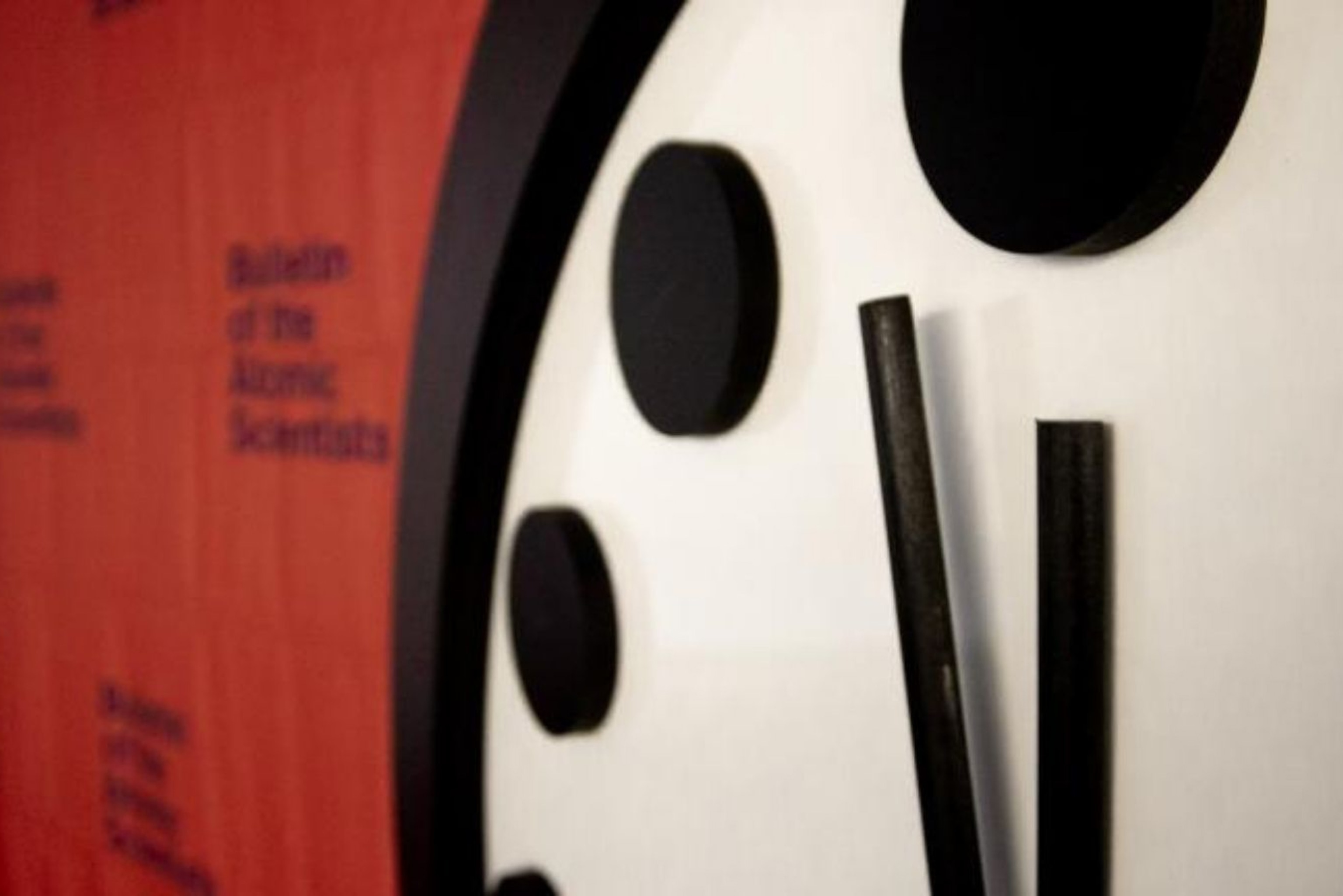 A Cold War icon, the clock conveys scientists’ views on humankind’s risk of destroying itself. Its current setting: just 100 seconds to midnight.

The Doomsday Clock, reset each January, remains at 100 second to midnight for the third year in a row. “The world remains stuck in an extremely dangerous moment,” say scientists who set the clock’s time.
Courtesy of the Bulletin of the Atomic Scientists

Regardless of what your watch tells you, it’s 100 seconds to midnight. That’s the interval on the symbolic Doomsday Clock between the present moment and “planetary catastrophe.” The alternative rock band R.E.M. put it another way: “It's the End of the World as We Know It.”

In 1947, a group of scientists who had worked on the first nuclear weapons dreamed up the Doomsday Clock as a metaphor warning just how close humanity was to destroying itself. The iconic clock has been the symbol of the Bulletin of the Atomic Scientists ever since, and on its 75th anniversary the group’s experts say we’re closer than ever to that dreadful wakeup call.

The clock is reset every January, and not even at the height of the Cold War, when Americans were digging fallout shelters and kids were being told to “duck and cover” under their school desks in case of atomic attack, were the clock’s hands this far into the final countdown.

That’s a pretty grim way to celebrate your 75th birthday, but as Bulletin editor John Mecklin observes, the ingredients for a possible doomsday scenario are more numerous than ever. When the clock was first depicted on the June 1947 issue—set at seven minutes to midnight—the editors were concerned solely with the likelihood that atomic bombs would soon rain down on the world’s capitals. Now, the Bulletin’s Science and Security Board considers more than just the nuclear threat when deciding where to set the clock’s hands each year.

“Climate change, biological threats, artificial intelligence—there are lots of emerging issues that could threaten the planet,” says Mecklin. In recent years, the committee has even added the rapid spread of disinformation to its growing list of existential threats to humanity.

The early atomic scientists “knew that nuclear weapons were the first human creation that could literally end civilization,” Mecklin says. “But they also realized there would be others.”

In their unnervingly entertaining new book, The Doomsday Clock at 75, Robert K. Elder and J.C. Gabel trace the history of the clock, which they argue is “the most powerful piece of informational design of the 20th century.”

The clock came about simply because the association’s editors—most of whom had been scientists working on the Manhattan nuclear project during World War II—wanted a striking cover for the first issue of the new magazine they were launching.

“The editors were afraid that the nuclear weapons they had helped create were not fully understood by either politicians or the public,” says Mecklin. “They wanted people to understand that these weapons could literally end civilization—and even, perhaps, the human species.”

Luckily, the Chicago-based scientists in charge didn’t have to look far for a graphic designer. Martyl Langsdorf, a celebrated landscape artist, was married to physicist Alexander Langsdorf, who worked on the Manhattan Project.

“Being the so-called artist-in-residence for the scientific community, they asked me to do the first cover for the magazine-to-be,” Langsdorf, who painted under the name “Martyl,” said in an interview before her death in 2013.

Sketching on the back cover of a bound copy of Beethoven’s sonatas, Langsdorf hashed out the concept of a clock with its minute hand sweeping toward midnight—symbolizing, as she said, “the urgency and the time of essence.”

Langsdorf’s design started as an entire clock face, but she soon stripped it down to the last 15 minutes of the hour. It apparently never occurred to Langsdorf that the editors might someday want to pull that minute hand far below the 45-minute mark. No matter: World events have only once raised that happy dilemma. In 1991, after the U.S. and Soviet Union signed the first Strategic Arms Reduction Treaty (START 1) and the Soviet Union dissolved, the clock briefly dipped to 17 minutes before midnight.

Catchy as the title is, the clock didn’t get its “doomsday” moniker until relatively recently. For decades it was known simply as the Atomic Clock. The first known references to the Doomsday Clock didn’t appear in newspapers until 1968, and the Bulletin formally adopted the name in 1972.

Critics of the Bulletin and its scary clock have dismissed it as a political stunt, or even counterproductive messaging that is unhelpful to the public and policymakers. If everything’s a crisis, then nothing’s a crisis.

Some, like science writer Charles Mann, aren’t fans of doomsday scenarios in general. “In the history of the human species, has any human heart ever been profoundly stirred by a graph?” he asked in a 2014 article about environmental doomsayers.

Mecklin says that the Doomsday Clock was always meant to be an alarm—and from a group of scientists who had a clear agenda against nuclear weapons. Co-founder Goldsmith was one of 70 scientists who had written a joint letter to President Harry S. Truman urging him not to use the atomic bomb against Japan. (They were too late: The letter didn’t reach Truman until after Hiroshima.)

Among the first national publications to go all-digital, the Bulletin stopped printing copies of the magazine in 2008. Still, the iconic clock appears on each digital issue and at the top of the Atomic Scientists’ web page.

As I scanned vintage issues of the Bulletin, each headline bristled with reminders of my 1960s childhood, spent under the shadow of a mushroom cloud: “Nuclear Blast Effects” (1961). “The Bomb in China” (1964). “The Politics of Bedlam” (1963). I vividly recall scrutinizing a map, printed on the front page of our suburban New Jersey newspaper, depicting concentric circles of destruction from a theoretical atomic bomb dropped on the Empire State Building (and sighing with relief to note that the outermost circle passed through not my town, but the town next door).

For many of us, that ‘60s dread of falling nukes has long since been diluted by a drumbeat of subsequent crises. It’s almost as if we’re becoming comfortable skating around the fringes of Armageddon.

Resetting the Doomsday Clock each January, he says, gives the world at large permission to contemplate the nuclear threat that hums, like a transformer behind an electric chair, with ominous persistence. “If there’s nuclear war, then any other issues you happen to have won’t matter.”

And so, Mecklin and his colleagues stubbornly play the part of the Biblical bad-news prophet Hosea, preaching a warning of doom to a distracted, if not disinterested, people.

So, all together now: “Happy birthday to youuuuu….” And let’s hope it’s only the candles that get blown out.