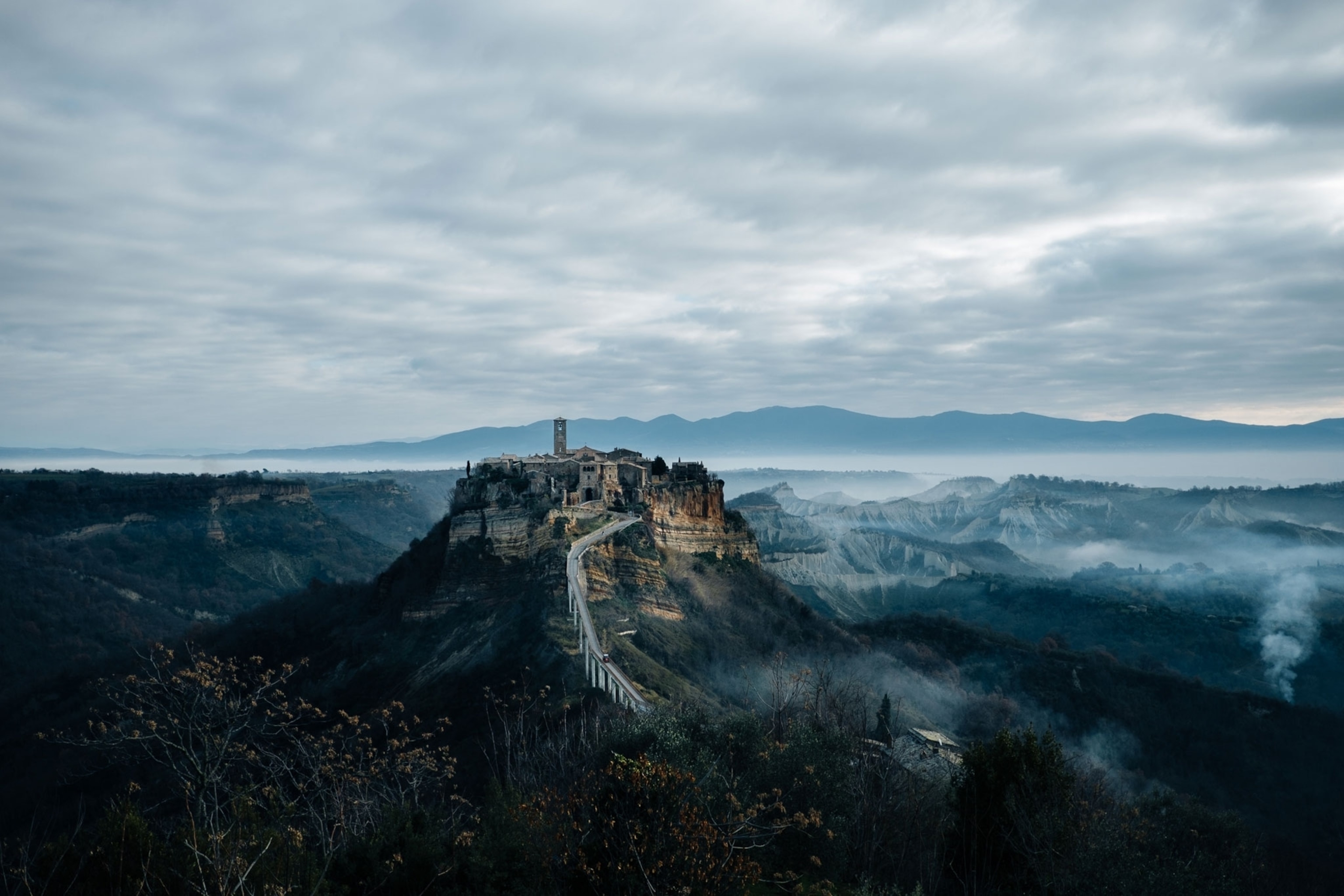 Can tourism save Italy’s ‘Dying Town’?

Like many rural villages in Italy, this 300 by 500-foot town was at risk of disappearing—until the world’s curiosity caught up to it.

The Italian village of Civita di Bagnoregio is disappearing. Every year, seven centimeters of land tumbles into the ravine below and only seven people still call the place home. However, one million tourists stopped by to see it in 2019.

Along the road some 75 miles north of Rome, street signs signal to drivers that they’re approaching Civita di Bagnoregio, "The Dying Town.” Perched on a crumbling plateau, the village has been plagued by landslides, earthquakes, and erosion since humans first settled there nearly 4,000 years ago. These days Civita has been reduced to a mere 300 by 500 feet.

In the middle ages, the plateau was three times its current size and housed upwards of 3,000 people, says Luca Costantini, a local geologist, but the river coursing through the valley surrounding Civita has gradually disintegrated the town from the bottom up. After a devastating earthquake in 1695, most residents fled and Civita’s population never recovered. By the 1920s, only 600 people still lived in the village. Today, there are only seven and Civita’s continued survival is uncertain.

Yet as word of the town’s imminent loss grew, so did the number of people who wanted to see it. Now Civita receives up to 10,000 visitors a day, casting doubt on its predicted demise. With the influx of people, money, and interest, some locals are hoping the town can be saved. Other Italian villages are watching Civita’s fate closely.

For those that remain, there are no grocery, hardware, or convenience stores in Civita. Apart from a handful of restaurants and tourist trinket shops, Civita residents depend on a narrow, 984-foot-long bridge to connect them to Bagnoregio, its sister city, for supplies. With nearly 3,600 people and 28-square miles, Bagnoregio’s resources sustain Civita’s tourism industry and residents. “Sometimes, even for a safety pin it is necessary to return to Bagnoregio with enormous waste of time and energy, but this is the beauty of Civita,” reads Civita's website.

As many as 2,500 towns in Italy are facing similar depopulation, according to a 2016 report by Legambiente, an Italian environmental association. As residents move away, the social, cultural, and economic strength of a town collapses, which drives even more people to leave, explains Cecilia Reynaud, a professor of political science at Roma Tre University in Rome.

It’s a pattern Reynaud is seeing across Italy. In 2018, more than 1.3 million people migrated within the country, mostly from the rural south to urban northern and central regions looking for work and opportunities.

The women who stay are choosing to have fewer children or none at all. In 2018, Italy’s birthrate was the lowest it had been since the formation of the modern Italian state. With the exodus and low birthrate, towns are struggling to sustain their population. (These lost cities around the world once thronged with life.)

To address the loss, some towns are experimenting with financial incentives to attract residents. Antonio Tedeschi, a councilman for the Molise region more than 180 miles southeast of Civita, proposed using regional funds to pay people $785 a month to move to the area. The catch: Applicants must live there for five years and open a business. The initiative received hundreds of applications from around the world. Candidates will be judged, in part, by their potential benefit to their prospective towns.

“When a small business opens in a small town, it’s important because it’s a sign of going against the current, a sign of possibility,” Tedeschi explains.

Today, inns outnumber residents and Bagnoregio boasts less than one percent unemployment. In 2017, Civita became the first Italian town to charge tourists five euro per person to visit. More than one million people crossed the bridge into Civita in 2019.

With the money from tourism, Civita’s geologists can focus on figuring out how to conserve the land instead of only responding to landslides. “Civita is very small and you have to think what 500 or 600 people look like inside this area,” says Costantini, who works with the Geological and Landslide Museum, Civita di Bagnoregio. The museum, one of the few organizations located in Civita, educates tourists and locals about Civita’s geological and cultural past, while working to ensure its future. Records of Civita’s landslides date back to the 15th century, which makes Civita a rich site for geologists.

The museum is now addressing a new question: Can Civita survive one million tourists annually? In just five years, visitors walking on Civita’s unpaved central square eroded 12 inches of soil, says Costantini. Before the influx, the square had been stable for 1,000 years. (Read more about how to turn overtourism into sustainable tourism.)

As geologists figure out what sustainable tourism might look like for the land, Civita’s mayor is trying to figure out the same for its people.

Tourism has turned Civita into an open-air museum. When photographer Camilla Ferrari first visited the town as a tourist, she was surprised to see another tourist photographing a local man pruning his tree.

Some locals have embraced this new attention. Felice Rocchi grew up farming in the valley but the tools of his family’s trade, passed down for generations, now hang unused in his cellar. Today, he uses these relics to illustrate the town’s past to tourists in his makeshift, cellar museum. The entrance fee: one euro.

Rocchi can narrate the past but present-day Civita is evolving. The growing season no longer dictate’s the town’s success, and the number of people in the town changes with the day. Traditions help the town maintain a sense of self—especially the annual Good Friday Procession in the spring. (See how rituals helped one village in the Philippines find peace after a deadly landslide.)

“The Good Friday Procession is one of the most important initiatives in my town and is certainly the oldest,” says Giordano Fioco, a local stoneworker from Bagnoregio who is now the president of the procession’s organizing committee—a role previously held by his father. “Every person from Bagnoregio participates in this event from the first years of their lives and that’s why we all grow up with the right spirit to carry on our tradition.”

A statue of Mary and Jesus is illuminated by a window in San Donato’s church in Civita during last year’s Good Friday mass.

A volunteer mends a hole in the red cloth covering the wooden coffin used to transport the 15th century statue of Christ to Bagnoregio during the Good Friday procession.

Fioco, along with more than 300 locals from both Civita and Bagnoregio, prepare for the event for months. Local seamstresses and leatherworkers labor over creating historically accurate costumes, giant religious paintings are removed from storage, and fraternal groups help organize the parade. Many of those involved are young. Fioco is only 33-years old.

On Good Friday, tourists and people from both Civita and Bagnoregio gather as men march Civita’s 15th century crucifix statue to Bagnoregio and back. Folklore surrounds this 400-year-old tradition. Many believe that if the crucifix isn’t returned to Civita by midnight, the village will lose the prized crucifix and be struck by an earthquake—a catastrophe that could finally end the town.

When the procession was rained out two years ago, the community was crushed. It is not only a religious event. The procession is a time when a common heritage connects Civita with its sister town, explains Fioco. For one day, Civita is the same as it was hundreds of years ago.

Civita is currently pursuing a UNESCO world heritage designation in an effort to formally recognize the town’s landscape and resilience against nature. The town recently presented a 250-page dossier to UNESCO with hopes that the title will solidify Civita’s role as a point of historical and cultural significance. Civita’s UNESCO team is also developing plans to create tourist attractions in the surrounding towns. If successful, Civita’s recovery could provide a roadmap for other towns aiming to revive their shrinking towns through tourism.