In 1960, a new dam on the Nile threatened Ramses II’s temples at Abu Simbel and other ancient treasures. Here's how the world saved them.

In 1960, a new dam on the Nile threatened Ramses II’s temples at Abu Simbel and other ancient treasures. Here's how the world saved them.

Romantic poet Percy Bysshe Shelley found inspiration in the long history of Egypt when he penned “Ozymandias” around 1818. In the poem, a traveler in the desert comes across the broken ruins of a huge statue:

And on the pedestal these words appear: ‘My name is Ozymandias, king of kings: Look on my works, ye Mighty, and despair!’ Nothing beside remains. Round the decay Of that colossal wreck, boundless and bare The lone and level sands stretch far away.

A meditation on impermanence, Shelley’s work shows how even the strongest are powerless against time and change.

Ozymandias is another name for Ramses II, the most powerful king of Egypt’s 19th dynasty. Ramses’ reign began a golden age in Egypt, brought on by his successful military campaigns into the Levant, Nubia, and Syria. Each of these victories was memorialized by new cities, elaborate temples, and massive statues erected all over his realm. (See also: Inside one of Egypt's biggest royal weddings.)

Among his many projects were the temples of Abu Simbel in Upper Egypt. Located in Nubia along the Nile river, they were carved out of solid rock. They commemorated a victory over the Hittites at Kadesh in 1275 B.C., and reminded Nubia of Egyptian dominance. Like many ancient structures, they eventually fell into disuse, true to the themes of “Ozymandias.” Sands moved in and buried the temples of Abu Simbel for millennia. (See also: Rival to Egypt, the Nubian kingdom of Kush exuded power and gold.)

In 1813, archaeologists recovered Ramses’ temples from the desert, and their immortality seemed assured until 1960, when plans to dam the Nile threatened to submerge them and other ancient monuments in the region. To save them, Egypt sponsored a massive international effort to launch the most complex archaeological rescue mission of all time: to move entire sites to higher ground. (See also: Dive beneath the pyramids of Egypt's black pharaohs.)

At almost 13,000 feet in length, the Aswan High Dam was to be built just south of the Nile-side city of Aswan, upstream of Luxor. The brainchild of Egypt’s president, Gamal Abdel Nasser, it would prevent destructive flooding, generate power, and boost agriculture in the region.

The project, however, had major drawbacks. The creation of Lake Nasser, a 298-mile-long artificial reservoir upriver from the dam, and whose southern limits extend into Sudan, would require the resettlement of 90,000 people. The impact on the monuments that studded the Nubian region would also be catastrophic. A smaller dam, built in 1902, had already flooded some of the monuments, including the temple complex of Philae. The new project further threatened this area, as well as scores of other sites, including the Abu Simbel complex near the Egypt-Sudan border.

Completion of the Aswan High Dam meant flooding the historically rich Nile River valley and the certain loss of many ancient sites. Some of the treasured temples and tombs were relocated to higher ground. 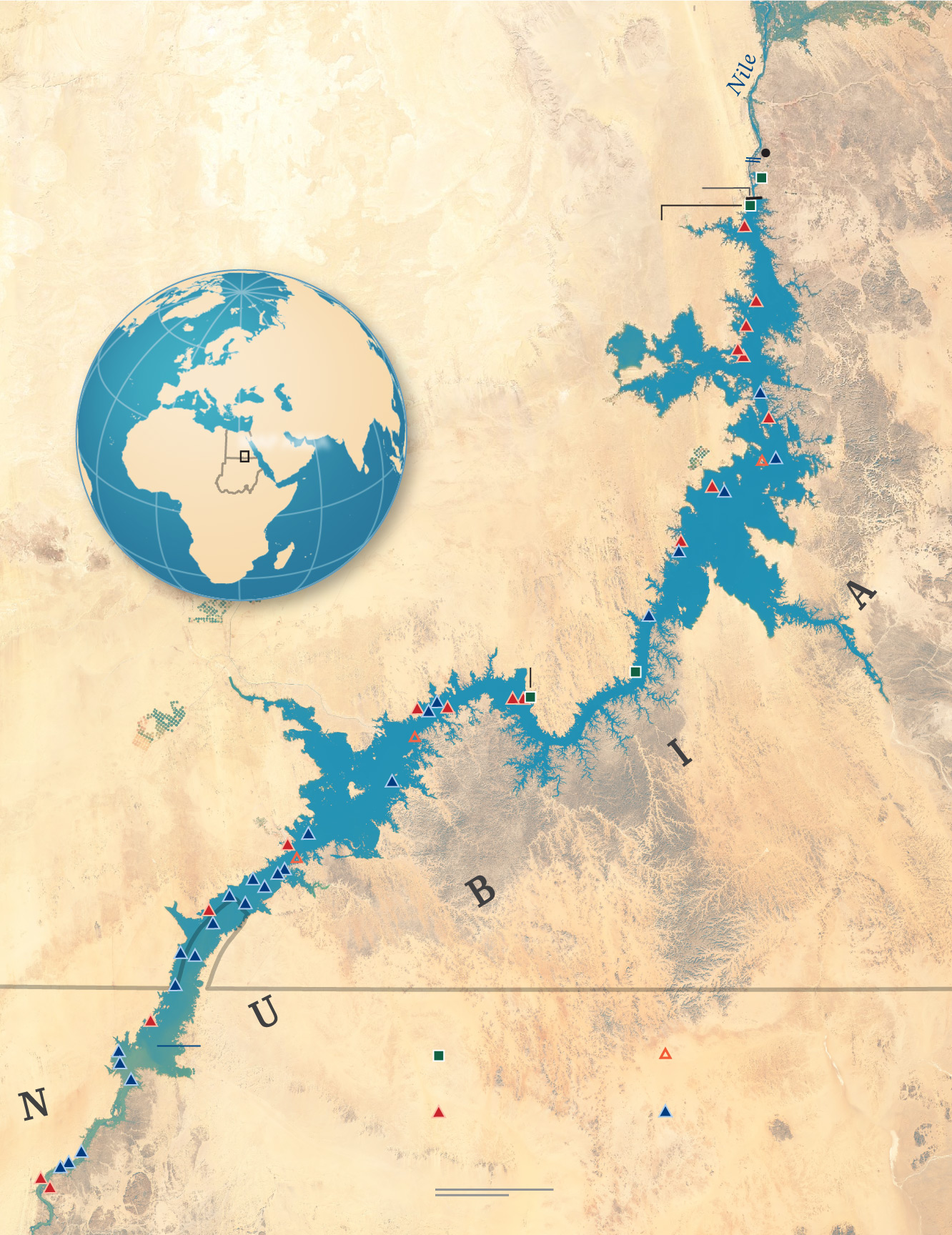 Completion of the Aswan High Dam meant flooding the historically rich Nile River valley and the certain loss of many ancient sites. Some of the treasured temples and tombs were relocated to higher ground.

In 1960, the executive committee of UNESCO (the United Nations Educational, Scientific and Cultural Organization) launched its International Campaign to Save the Monuments of Nubia, appealing for the help of its member states. (See also: Egypt in the moment.)

Some 30 countries formed national committees—made up of researchers, archaeologists, historians, engineers, and architects—to carry out the rescue mission. Following an aerial survey that identified the location of the archaeological areas most likely to be flooded, some 20 foreign delegations launched campaigns to safeguard the monuments.

UNESCO organized fund-raising to rescue and preserve as many of the archaeological monuments and sites as possible. Thirty countries even issued stamps depicting the monuments as part of a fund-raising drive to cover the costs of the international campaign.

The Egyptian government and UNESCO experts drew up a list of monuments threatened by the dam. A survey of just a few revealed their huge historical range spanning more than 2,000 years of human civilization. The sites included the ancient fortress of Buhen in Sudan, built by Senusret III in the 19th century B.C. It was excavated as part of the UNESCO project, and two temples were dismantled and transferred. The fortress itself, however, could not be saved and is now under water.

Other sites that were successfully transferred include: the Temple of Amada, built by Thutmose III in the 15th century B.C.; Wadi es-Sebua, another Ramses II–era temple of the 13th century B.C., famous for its avenue of sphinxes; and the Temple of Kalabsha, completed around the time Octavian declared himself the Roman Emperor Augustus in 27 B.C.

The temple complex of the island of Philae, whose decorations had been severely damaged by partial flooding caused by the earlier dam project, extends the timescale of the Nubian monuments into the Christian era. The complex was mainly built in the third century B.C., and was considered sacred to the goddess Isis. Later, a gate was erected by Emperor Hadrian in the second century A.D., and the temple was converted into a Church in A.D. 540 during the reign of the Byantine Emperor Justinian. Philae was eventually moved to safety on the nearby island of Agilkea.

In addition to relocating monuments, major excavations across the whole of the Nubia region were also carried out as the dam project was completed. As a result, a vast wealth of previously unknown heritage was unearthed, ranging from Stone Age artifacts to a ninth-century church decorated with murals.

The greatest challenge was saving the twin Temples of Abu Simbel, whose four colossal statues of Ramses II had become an iconic image of Egypt. The engineering feats and the expense were daunting. The team had a hard deadline, as Lake Nasser would reach full capacity in 1966.

In 1963, after numerous ideas were proposed and rejected, it was decided that Ramses’s temples would be cut into more than a thousand blocks and relocated to a higher spot. The mission required complex infrastructure. A temporary dam was built around the site to keep it dry. A network of supply roads had to be laid, an electricity-generating station had to be installed, and accommodations had to be provided for the thousands of laborers involved in the project.

Dismantling concluded in April 1966. Reconstruction followed, and National Geographic magazine documented the colossal effort of excavating the new site, moving the blocks, and putting the pieces back together. After more than two years of painstaking work, Abu Simbel was inaugurated in its new, higher location on September 22, 1968.

This effort remains unequalled in the history of archaeology. The former director of the Egyptian Monuments of Nubia Service later wrote: “Thus the most imposing monument ever hewn out of rock, and the jewel of the Nubian treasures, had been saved. At the same time, the transfer of the temples fulfilled King Ramses II’s dream of immortalizing his temple.”