The problem America has neglected for too long: deteriorating dams

Editor’s note: On May 27, after a dispute about the group at fault for the floods, Michigan Governor Gretchen Whitmer called for the state’s Department of Environment, Great Lakes, and Energy to investigate the precise cause of the Edenville and Sanford dam failures, with a preliminary account due by August 31. The announcement prompted demands for an additional independent investigation.

Aging and undermaintained infrastructure in the United States, combined with changing climate over the coming decades, is setting the stage for more dam disasters like the one that struck Midland, Michigan, last week.

More than 91,000 dams dot the nation—and roughly 15,500 of them could cause fatalities if they failed, according to the National Inventory of Dams. Most of these dams were built many decades ago. By 2025, 70 percent of them will be more than a half century old, according to the American Society of Civil Engineers. 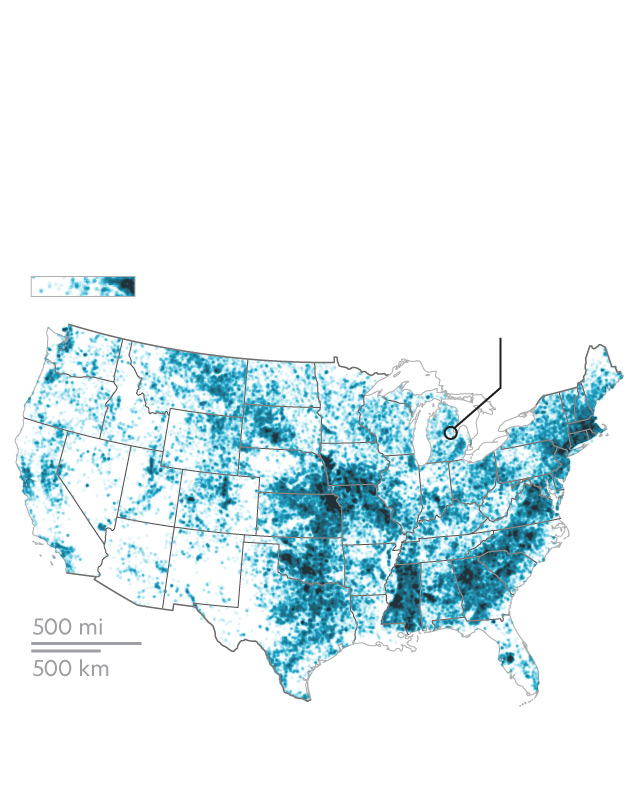 There are more than

The dams shown below are recorded in the National Inventory of Dams, which is compiled by the U.S. Army Corps of Engineers.

THERE ARE 276 DAMS NOT SHOWN FOR 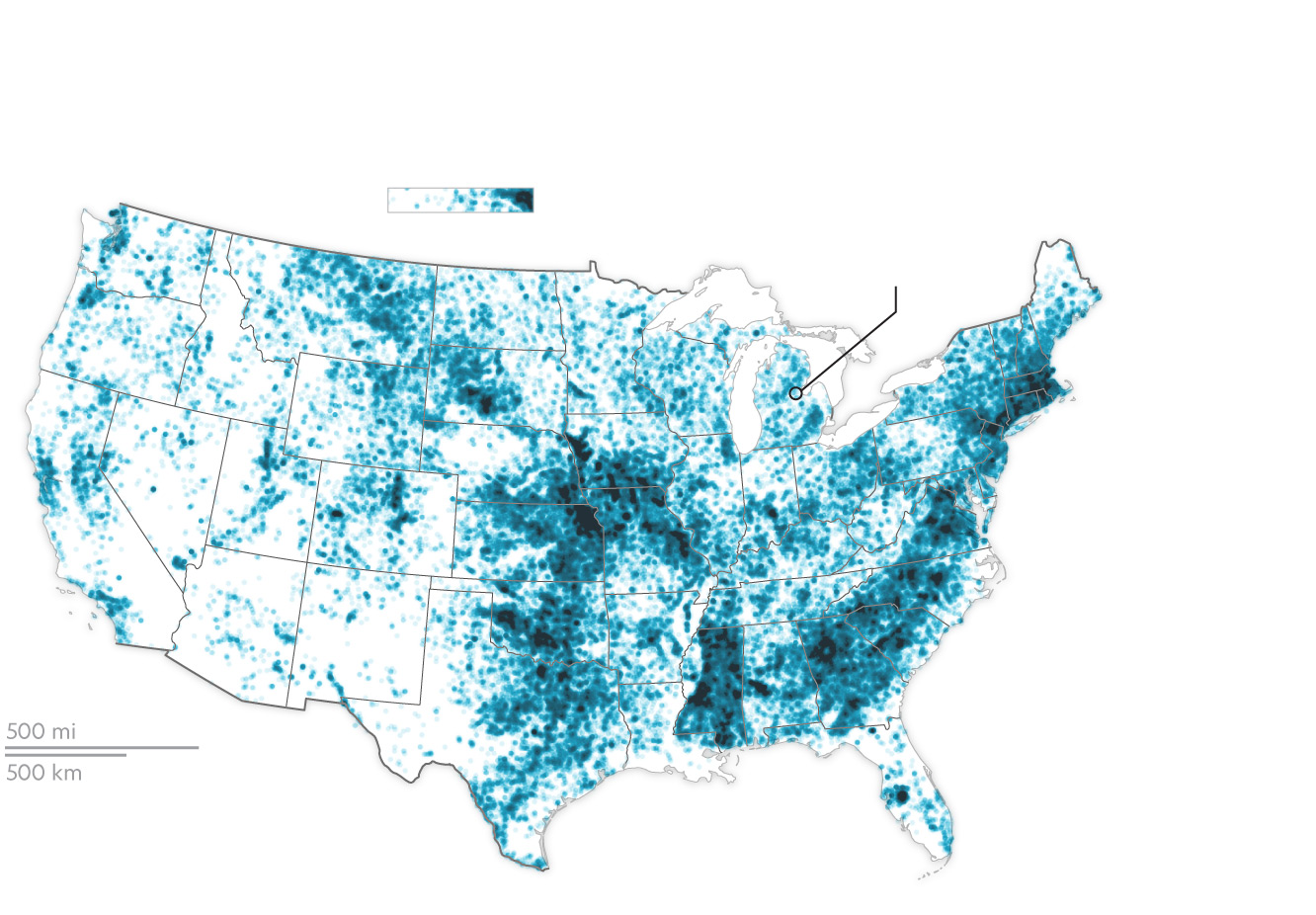 The dams shown below are recorded in the National Inventory of Dams, which is compiled and maintained by the U.S. Army Corps of Engineers.

THERE ARE 276 DAMS NOT SHOWN FOR ALASKA, HAWAII AND PUERTO RICO.

Combine this aging and outdated infrastructure with the more frequent, heavy rains that climate change likely will generate, and the nation will face a “perfect storm” for more catastrophes, says Anne Jefferson, a hydrogeologist at Kent State University in Ohio.

This latest dam failure came after a deluge dumped nearly five inches of water on central Michigan in just 48 hours. As the waters rose, the nearly century-old Edenville dam collapsed and sent a torrent downstream that overflowed the Sanford dam. Water surged across roads and into homes and businesses. By Wednesday evening, the flood had almost completely drained one lake upstream of the dams, leaving a vast muddy expanse in its wake.

For years, concerns had swirled about the condition of Edenville dam, which is privately owned and operated. In 2018, the Federal Energy Regulatory Commission (FERC) revoked the Edenville dam’s license to generate hydroelectricity, citing concerns that it could only withstand about 50 percent of the Probable Maximum Flood, an estimate of the largest flood that could sweep the region. For more than 14 years before that license was pulled, the dam’s owner had failed to make the requested improvements.

At many dams across the nation, investment hasn’t kept up with the repairs and upgrades needed to keep these systems standing strong. On the American Society of Civil Engineers report card for U.S. infrastructure, dams earned a "D" letter grade. 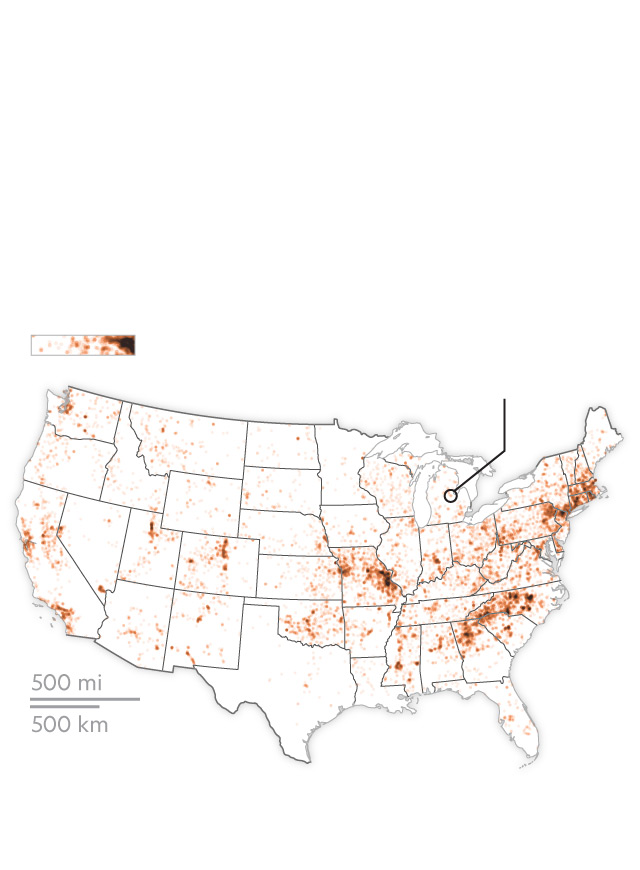 These 15,500 dams are deemed so crucial that if they were to fail, it would likely cause loss of life and heavy economic damage. Both of the dams near Midland, Michigan had this rating.

The hazard potential RATING for 7,190

dams in Texas is not available. 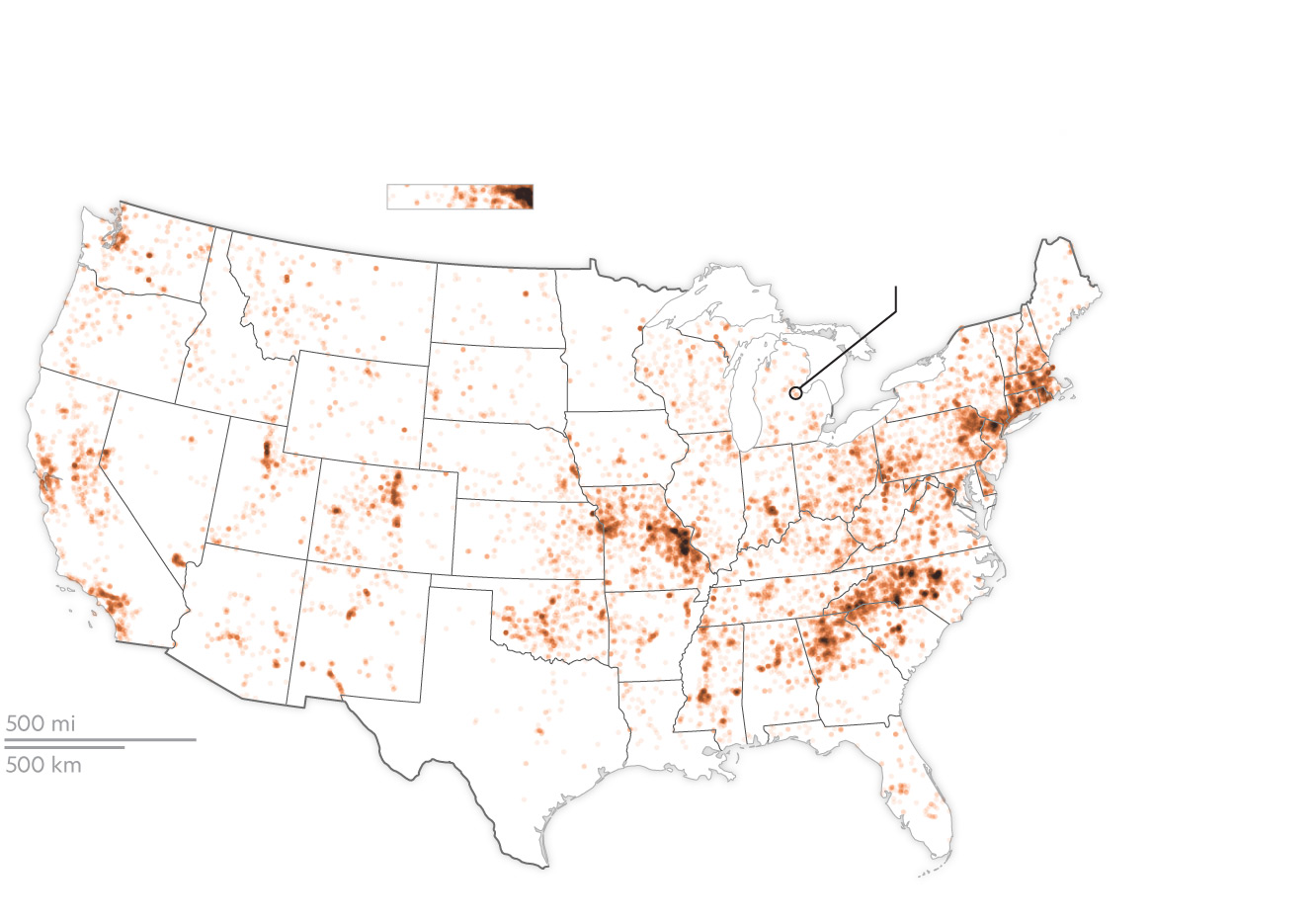 About 1 in 6 dams has a high hazard potential.

These 15,500 dams are deemed so crucial that if they were to fail, it would likely cause loss of life and heavy economic damage. Both of the dams near Midland, Michigan had this rating.

The hazard potential RATING for 7,190 dams in Texas is not available.

Exactly how many U.S. dams are at risk of failing is uncertain. The National Inventory of Dams lists condition information for nearly 80 percent of high-hazard potential dams, meaning that their failure would result in at least one death. More than 2,330 of these high-hazard dams need repairs, some 15 percent of all dams in this hazard category. But data remain spottier for dams of other hazard potentials, such as significant or low hazard.

Information about the condition ratings of specific dams is not available to the public. A recent investigation by the Associated Press uncovered and mapped out 1,688 of the high-hazard dams that were in poor or unsatisfactory condition. The true number is likely higher, according to the AP report.

Repairing and upgrading dams across the United States would cost upwards of $70 billion, based on estimates from the Association of State Dam Safety Officials. To address issues for the roughly 700 dams owned by the U.S. Army Corps of Engineers alone would cost more than $25 billion, by the Corps’ estimates, and would take more than 50 years to complete based on the current level of funding.

Dam ownership and operation is divided among private enterprises—about 63 percent of the U.S. total—and state, local, and federal governments. The regulation and oversight of private and other non-federal dams are largely on a state-by-state basis, says Martin McCann, director of Stanford University’s National Performance of Dams Program. But that oversight varies widely: For instance, Alabama has no dam safety regulatory program, while California has a relatively well-funded program with a technically strong staff, McCann says. Many state dam safety programs lack resources or the regulatory authority to effectively manage the dams, according to ASCE. 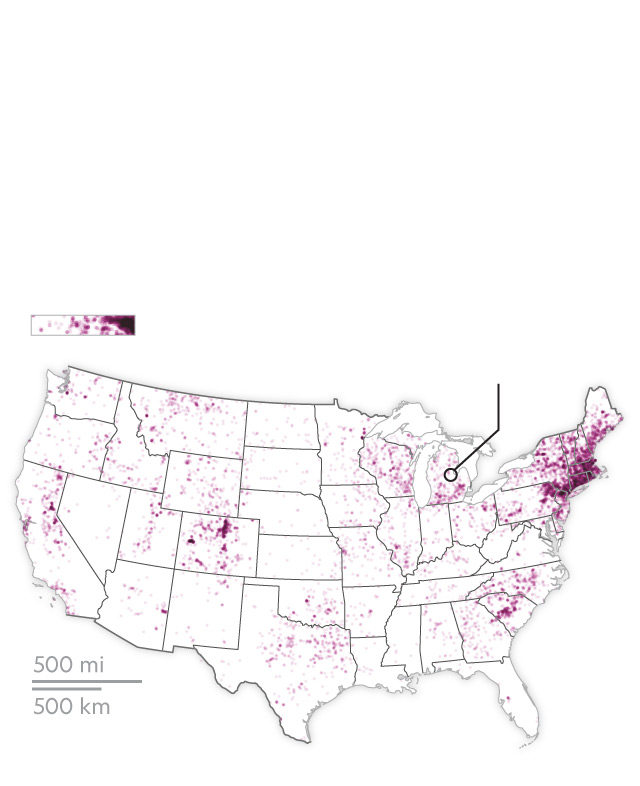 Old dams are not necessarily unsafe, but they need to be maintained for integrity.

The dams near Midland were built in the 1920s and had a history of safety concerns. 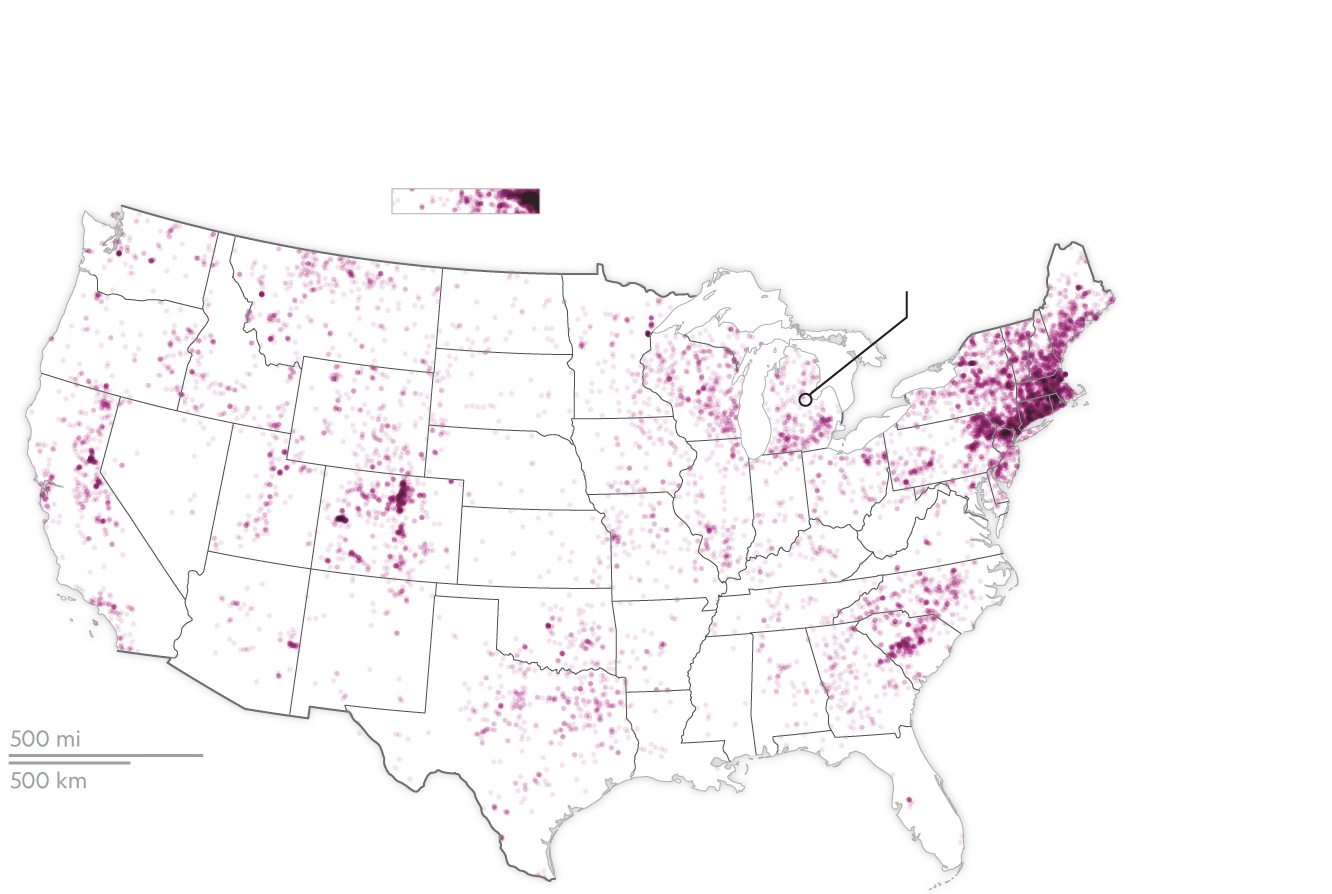 Old dams are not necessarily unsafe, but they need to be maintained for integrity.

The dams near Midland were built in the 1920s and had a history of safety concerns.

But even California’s well-funded program isn’t invincible. In 2017, the Oroville dam on California’s Feather River failed, sparked by the crumbling of parts of the concrete spillways where excess water flows downstream. The dam holds more than a trillion gallons of water; the collapse forced nearly 200,000 people to evacuate the area. The report from the independent forensics investigation concluded that the incident was due to a “long-term systemic failure” of not only the California Department of Water Resources, but also general industry-wide practices for identifying and addressing problems. 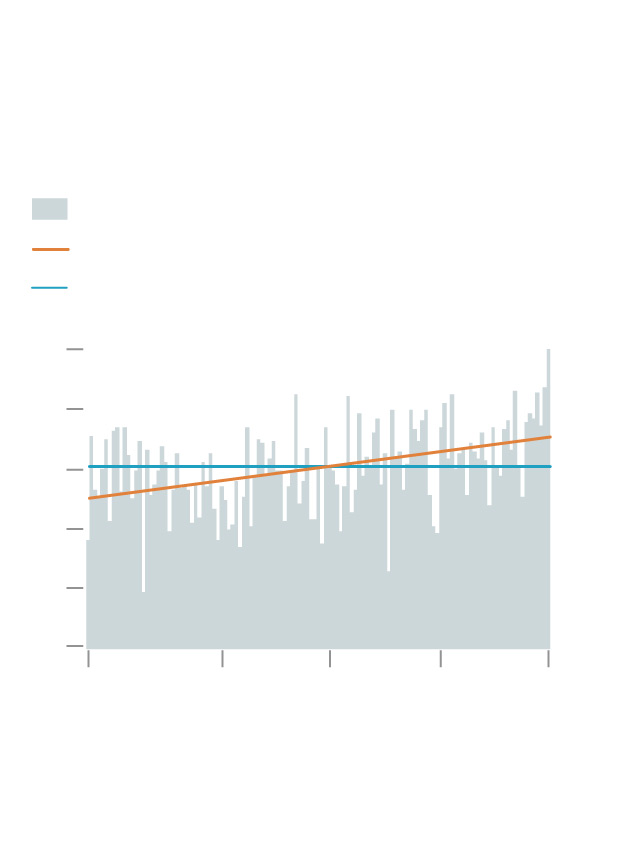 increasing rainfall in the Upper Midwest

The Edenville dam in Michigan was rated as poor on its last inspection in August of 2018 and Sanford dam rated as fair. After years of conflict between owner Boyce Hydro and the surrounding communities, the situation seemed to be heading toward resolution. Midland and Gladwin counties set up a group to purchase the pair of dams and their associated lakes with the intention of repairing the systems and overseeing continued maintenance—but the rain swept through and the region flooded before the process was complete.

The problems with compromised dams will likely grow more severe in the years ahead. “The dawning reality is that the dam, levee, and other infrastructure failures will be more likely to occur as global warming intensifies,” says Shana Udvardy, a climate resilience analyst with the Union of Concerned Scientists.

As air temperatures increase, so does the amount of moisture the atmosphere can hold; that means more frequent and intense rain and flooding, Udvardy says. That effect may be particularly pronounced in the Midwest, where climate models suggest that winter and spring rains could increase by up to 30 percent by the end of the century, according to the Fourth National Climate Assessment. The last few decades have already seen more heavy downpours across the nation. The Michigan catastrophe follows exceptional flooding across large swaths of the U.S. in 2019, which was the wettest year on record for Michigan, Minnesota, North Dakota, South Dakota, and Wisconsin.

Many of the nation's dams weren't designed with these modern or future trends in mind. “We’ve sort of built ourselves and locked ourselves into a past climate,” Jefferson says.

For centuries, humans have strived to harness the environment to suit our needs. Dams are part of this precarious legacy. We’ve enjoyed benefits from these systems, and now must deal with their risks. “We’re seeing again and again,” Udvardy says, “it’s not whether they’re going to fail; it’s a matter of when they’re going to fail.”