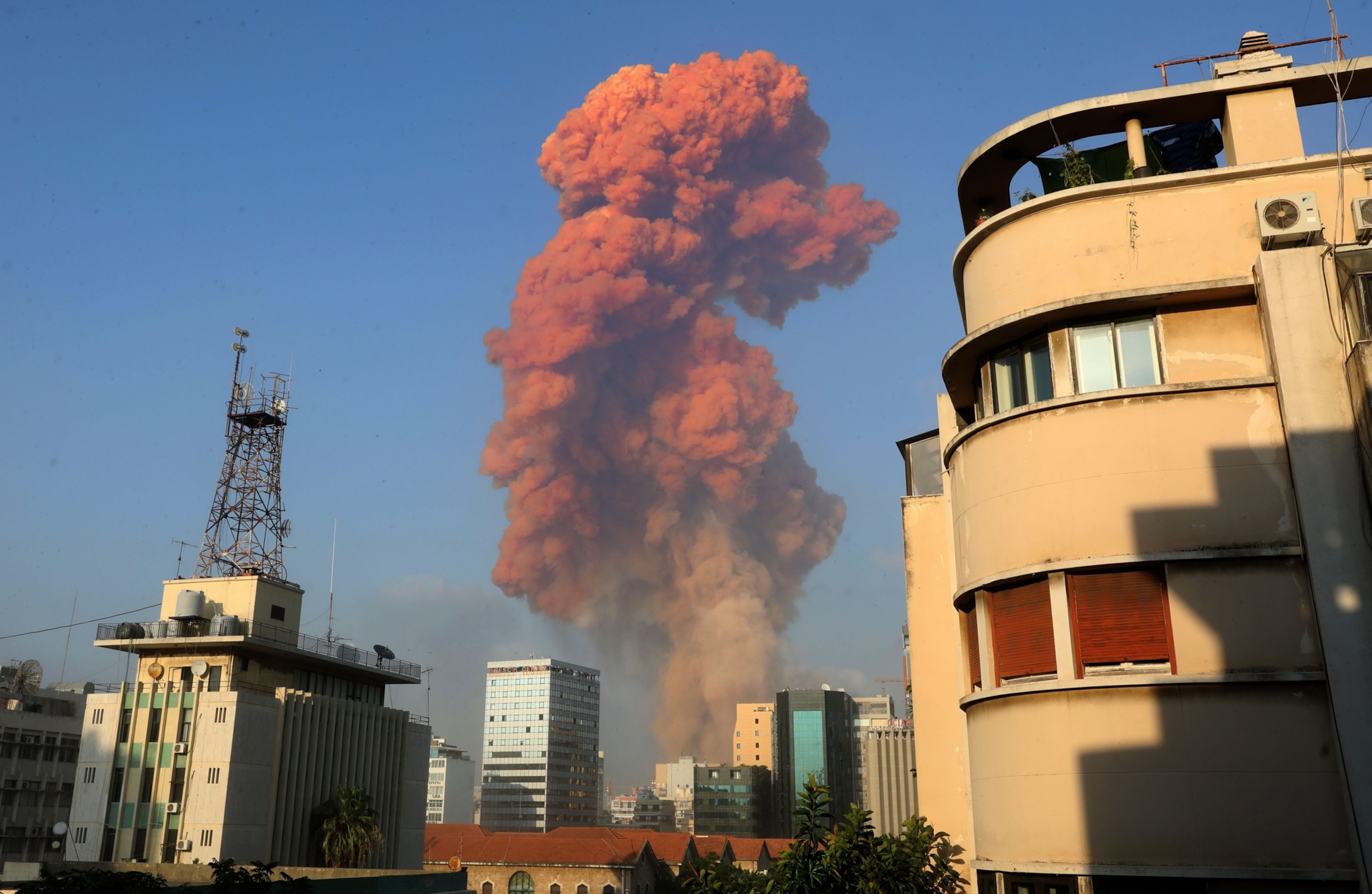 The deadly history of ammonium nitrate, the explosive linked to the Beirut blast

A deep-dive into the chemistry and legacy of the compound offers clues into what sparked Lebanon’s catastrophe.

A large explosion rocked the Lebanese capital Beirut on August 4. The blast, which rattled entire buildings and broke glass, was felt across the city.

Look closely at footage of downtown Beirut, and you can see the ground warp and buckle just after the blast erupted from the warehouse on August 4. Cell phone videos also show the shockwave and dust cloud rushing through the portside buildings, leaving behind scenes of carnage in the Lebanese capital.

The blast registered as magnitude 3.3 on the Richter scale, and caused devastation usually associated with major earthquakes. Two days later, the death toll rose to at least 130 people with another 5,000 injured. Beirut mayor Marwan Abboud told Agence France-Presse that 300,000 people are unable to return to their homes, as the damage covered half the city and could cost up to $15 billion to repair.

Lebanese authorities are blaming the incident on more than 2,750 metric tons of ammonium nitrate, a substance commonly used in fertilizers as well as in explosives for mining and construction projects. The chemicals reportedly have been sitting by the docks since 2013. Documents unearthed by Al Jazeera say the ammonium nitrate arrived in Beirut aboard a Russian-owned cargo ship after the vessel experienced mechanical problems at sea. The shipment was eventually abandoned, and its cargo moved into the hangar where it remained, despite Lebanese custom officials requesting its disposal on at least six different occasions, according to The New York Times.

What detonated the explosive compound remains unclear—but the Beirut blast is not the first time ammonium nitrate has led to calamity. Since 1916, the chemical has been responsible for at least 30 disasters, some accidental and some intentional.

What leveled Beirut on Tuesday sounds eerily similar to descriptions of a massive 1947 explosion in Texas City, Texas. The S.S. Grandcamp—carrying ammonium nitrate, fuel, and ammunition—arrived at the Houston-area port with smoke spewing from its cargo hold. The ensuing explosion killed some 600 people, including everyone on the dock and ship. Injuries surpassed more than 5,000; the blast destroyed 500 homes and the smoke from it billowed for days.

In April 1995, American terrorists Timothy McVeigh and Terry Nichols used two tons of the compound in a truck-bomb attack on the Oklahoma City federal building; 168 people were killed. And just five years ago, an estimated 800 tons of ammonium nitrate fueled a warehouse explosion that leveled part of a port in the Chinese city of Tianjin, killing 173.

Annually, the world produces and stores enormous amounts of ammonium nitrate—more than 20 million tons in 2017. But for the compound to figure in an explosion of this magnitude, chemists and explosives experts say a lot has to go wrong.

Ammonium nitrate would only explode on its own if its temperature was rapidly raised to 400 degrees Fahrenheit.


Compared to most combustible materials, ammonium nitrate itself is not exceptionally explosive. But the compound can contribute to explosions because it belongs to a chemical class known as oxidizers.

When something burns, it requires oxygen—that’s why fire extinguishers can easily put out flames by smothering them. Oxidizers do the opposite: They increase the amount of oxygen molecules that concentrate in a space, which helps make other substances more flammable.

Piling up large amounts of ammonium nitrate allows more heat to be contained for longer when a mixture burns. Add enough of the oxidizer to a fire, and it will trigger an explosion. Though ammonium nitrate was first synthesized in 1659 by German chemist Johann Rudolf Glauber, it wasn’t used in explosives until World War I, when weapon makers mixed it with TNT (aka dynamite) to make cheaper bombs.

“There’s a massive amount of energy given off very quickly,” says Stephen Beaudoin, a chemical engineer also at Purdue University. “It will oxidize that fuel very rapidly, create a huge amount of gas, and give off a huge amount of heat. The huge change in phase creates a shockwave.”

In the Beirut explosion, the resulting shockwave moved faster than the speed of sound; cell phone videos show the impact washing over the city a few seconds before a sonic boom rumbles.

Using math pioneered in the 1940s to infer the atomic bomb’s yield, experts can analyze videos of a shockwave to get rough estimates of an explosion’s total energy and how much material blew up. By comparing the blast’s size against nearby buildings, video of the Beirut incident shows that in the eighth of a second after the explosion occurred, its spherical shockwave grew to roughly 800 feet wide.

Measured using this method, onlookers estimated the blast was roughly equivalent to 400 to 3,000 tons of TNT, an explosive material that’s also used as a unit to measure the destructiveness of explosions. Though Jeffrey Lewis, an arms control expert at the Middlebury Institute of International Studies, estimates it’s probably closer to 400 tons. By contrast, the atomic bomb dropped on Hiroshima, Japan, in 1945 had a yield of at least 13,000 tons of TNT. (Seventy-five years later, National Geographic revisits the elusive horror of Hiroshima.)

Blast calculations suggest that at sea level, an explosion like Beirut’s would require about 1,000 tons of ammonium nitrate. Given that these back-of-the-envelope calculations come with a wide margin of error, the estimate is consistent with the 2,750 tons that Lebanese officials say was stored by the port. Or, this discrepancy might mean that the material inside the warehouse was not pure ammonium nitrate, and some other compound was involved with the blast.

Even a small amount of contamination
would have made the ammonium nitrate more likely to detonate.

Some internet rumors speculate that because the ammonium nitrate was left to sit in a warehouse for several years, it would have degraded, becoming more volatile and increasingly dangerous over time. But David Chavez, an explosives scientist at the Los Alamos National Laboratory in New Mexico, doubts that scenario. “Ammonium nitrate does not degrade with time under normal storage conditions,” he says.

Though Lebanese authorities have said ammonium nitrate was the culprit in the blast, Lewis notes that in many cases commercial explosives are referred to as just this compound even though they contain additives.

"If the pictures are right, this was something meant to be an oxidizer used with other agents," such as explosives used for mining, he says.

Reconstructing exactly what went wrong in Beirut will be difficult, but Chavez says officials should look for evidence of improper storage, confinement, contamination, lack of ventilation, and potential sources of ignition.

Such investigations may take time. Lebanon was already dealing with political and financial woes, due in part to the Syrian migration crisis and the coronavirus pandemic.

There are also longer-term effects to consider. The blast filled Beirut’s air with particulate matter, one of the most common forms of air pollution. It’s known to predispose people to the worst effects of respiratory diseases, including COVID-19. Moreover, the decomposition of ammonium nitrate can create byproducts known as nitrogen oxides, which are known to cause respiratory distress. Other health issues, akin to those seen after 9/11, may emerge given the widespread destruction to buildings and roads.

“All kinds of other materials probably ignited and burned,” says Beaudoin. “Plastics, for example, paint, and other organic materials that completely or partially burned—all the building materials that became dust.”

Editor’s note: Michael Greshko contributed reporting to this story. This article has been updated to include the temperature required to detonate pure ammonium nitrate. The story was originally published on August 6.