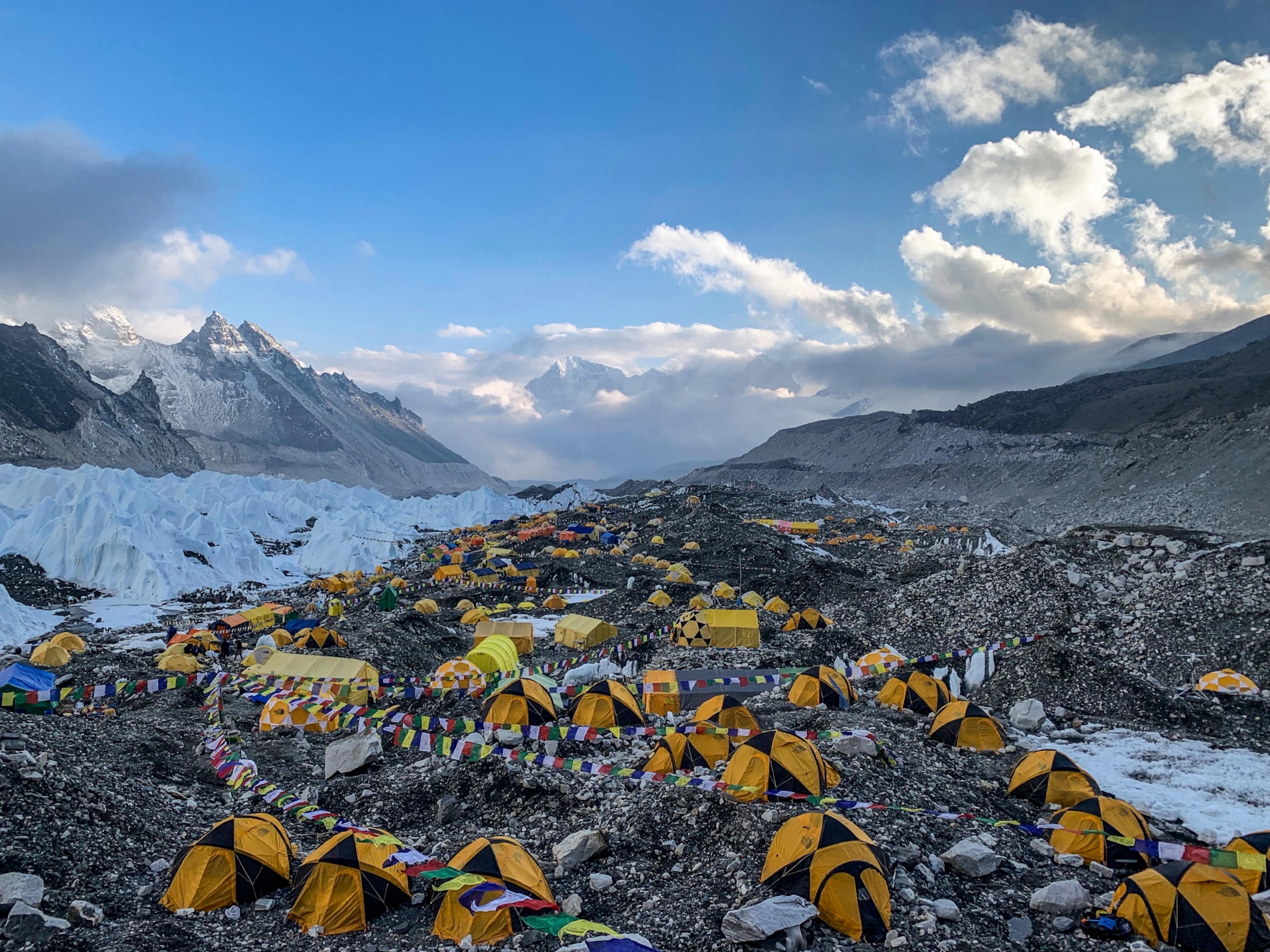 What does a COVID-19 outbreak mean for life at Everest’s base camp?

Climber Mark Synnott talks about the COVID-19 outbreak in Nepal and his search for the camera that could change history.

Located at the foot of the Khumbu Glacier, Mount Everest’s base camp in Nepal is a staging ground for climbers who attempt to summit the world’s highest peak.
Photograph by Alex Tait, Nat Geo Image Collection

May is traditionally the home stretch of the spring climbing season on Mount Everest. By now climbers have adjusted to the altitude, and Sherpas have set most of the ropes needed to reach the summit around the end of the month.

After the Nepali government canceled the climbing season last year, this was supposed to be a record-setting year—with more permits issued than ever before. But as the country struggles with a surge of COVID-19 and reports of several cases in base camp, May 2021 could end in disaster.

Climber and writer Mark Synnott knows what a blow that this would be to Nepal, which relies heavily on the revenue generated by the annual pilgrimage to the world’s tallest mountain. “Everest season is crucial to Nepalis, especially in the Khumbu region where the Sherpa come from,” he said.

Synnott was there in 2019—the last full Everest season—as part of an expedition to look for a climber lost nearly a century ago, on one of the first Everest expeditions. The British mountaineers George Mallory and Sandy Irvine famously disappeared during their quest to summit Mount Everest in 1924. Mallory’s body was discovered in 1999, but Irvine and the pocket Kodak camera he was believed to have carried were never found. Whether the pair had made it to the summit—29 years before Edmund Hilary and Tenzing Norgay accomplished the feat in 1953—has remained the mountaineering world’s most tantalizing mystery ever since.

Synnott’s story about his search, with photographs by his climbing partner Renan Ozturk, appeared in the July 2020 issue of National Geographic, and their documentary aired on the National Geographic Channel. Now comes a fuller telling of that experience and a deep look at the history of Everest with Synnott’s engrossing new book, The Third Pole: Mystery, Obsession, and Death on Mount Everest.

I recently caught up with Synnott via Zoom from his home in New Hampshire’s White Mountains, to talk about the current situation on Everest, his research on Mallory and Irvine, what he tells his kids about taking risks, and his next adventure projects.

What’s your view on climbers returning amid COVID-19?

It’s tough. This is the first real climbing season in two years, but only on the Nepal side. China has closed Tibet—the other side of the mountain—to all foreigners. So, it’s really only half a season. The Nepali authorities have issued more than 400 Everest permits—the most ever for one season. You add in an equal number of Sherpas plus other porters and it’s a huge number of humans on the mountain.

(Here’s how one elite Everest guide would improve safety on the mountain.)

On one level, you can understand why they did it—the Nepali economy relies heavily on the revenue that climbers and outfitters bring. But the whole thing could backfire if there is a COVID-19 outbreak in base camp. It looks like that might be happening now.

What’s the “third pole” referred to in your book’s title?

The start of the 20th century saw nations racing for the North and South poles, two of the last unclaimed, major exploration firsts. An American-led team was credited with making it to the North Pole in 1909, and two years later a Norwegian expedition arrived at the South Pole. Summiting Mount Everest, which the British had dubbed “The Third Pole,” was seen as the last of these huge prizes. But then World War I put all that on hold.

It’s easy to think that people have achieved almost everything “impossible.” But there‘s always going to be a next amazing feat or adventure.
ByMark Synnottclimber and author

Fast forward to 1924, George Mallory’s team, which included its youngest member, Sandy Irvine, was determined to claim Everest for Great Britain. Since his countryman Robert Falcon Scott had lost out to the Norwegians for the South Pole and tragically so—the team all perished—Mallory and Irvine undoubtedly felt a lot of pressure to accomplish the feat for their country.

Historians still don’t know whether Mallory and Irvine made it to the top of Everest. What do you think?

It’s really low percentage. Everything was stacked against them. For me, the story is more about what happened. How did they meet their demise? Did they fall off or did they just sit down on the ridge and freeze to death? It’s such a perfect mystery because the clues don’t add up. How is Mallory found at 26,700 feet, lying face down in the gravel, with a rope tied around his waist?

(Want to climb Mount Everest? Here is what you need to know.)

What great exploration firsts are still out there?

It’s easy to think that people have achieved almost everything that we previously thought was “impossible.” But there’s always going to be a next amazing feat or adventure. Caving offers some interesting possibilities. Finding the world’s deepest cave—which for cavers is the equivalent of Everest—is always an ongoing thing. There could always be a deeper one somewhere, hiding underground, waiting to be explored. And there is also the ocean, of course. I read somewhere that we know more about the surface of Mars than we do about what lies at the bottom of the ocean.

National Geographic just sent you and climber Renan Ozturk on another epic trip. Talk a little about what you guys were up to while there.

We went to the Upper Paikwa River Basin near Guyana’s northwestern frontier to look for new frog species. It’s one of the world’s least explored but biggest hotspots of biodiversity. The trip was led by Bruce Means, a 79-year-old evolutionary biologist who has made this region his life’s work, particularly the study of frogs here. The region is famous for its tepuis—crazy flat-top mountains that rise straight up out of the jungle like skyscrapers. To make sure we could get to the top of a mountain called Weiassipu, which had never been climbed before, we brought Alex Honnold along as our secret weapon. Don’t worry—I’ll have my story to you soon.

You’ve got four kids ranging from four years old to 22. How do you talk to them about adventure and taking risks?

My 22-year-old old lives in Colorado right now and is as into skiing as I was into climbing when I was his age. So he’s out skiing the backcountry every day and wants to do ski mountaineering and all that kind of stuff. And honestly, it keeps me up at night because I can manage my own risk, but I can’t manage his for him. He’s certainly at the point where he’s good enough to get himself into a lot of trouble. And I communicate with him constantly on this subject—asking him about the snowpack, the angle of the slopes he’s skiing, making sure he’s paying attention to avalanche forecasts. But there’ve been times where the phone rings, and I just can’t help but worry.

Do you have another book in mind?

I have an idea. But I’m not telling anybody about it. Not yet at least. You’ll get a call.

Peter Gwin is an editor-at-large and co-host of the podcast Overheard at National Geographic.

Editor’s note: This interview has been edited for length and clarity.