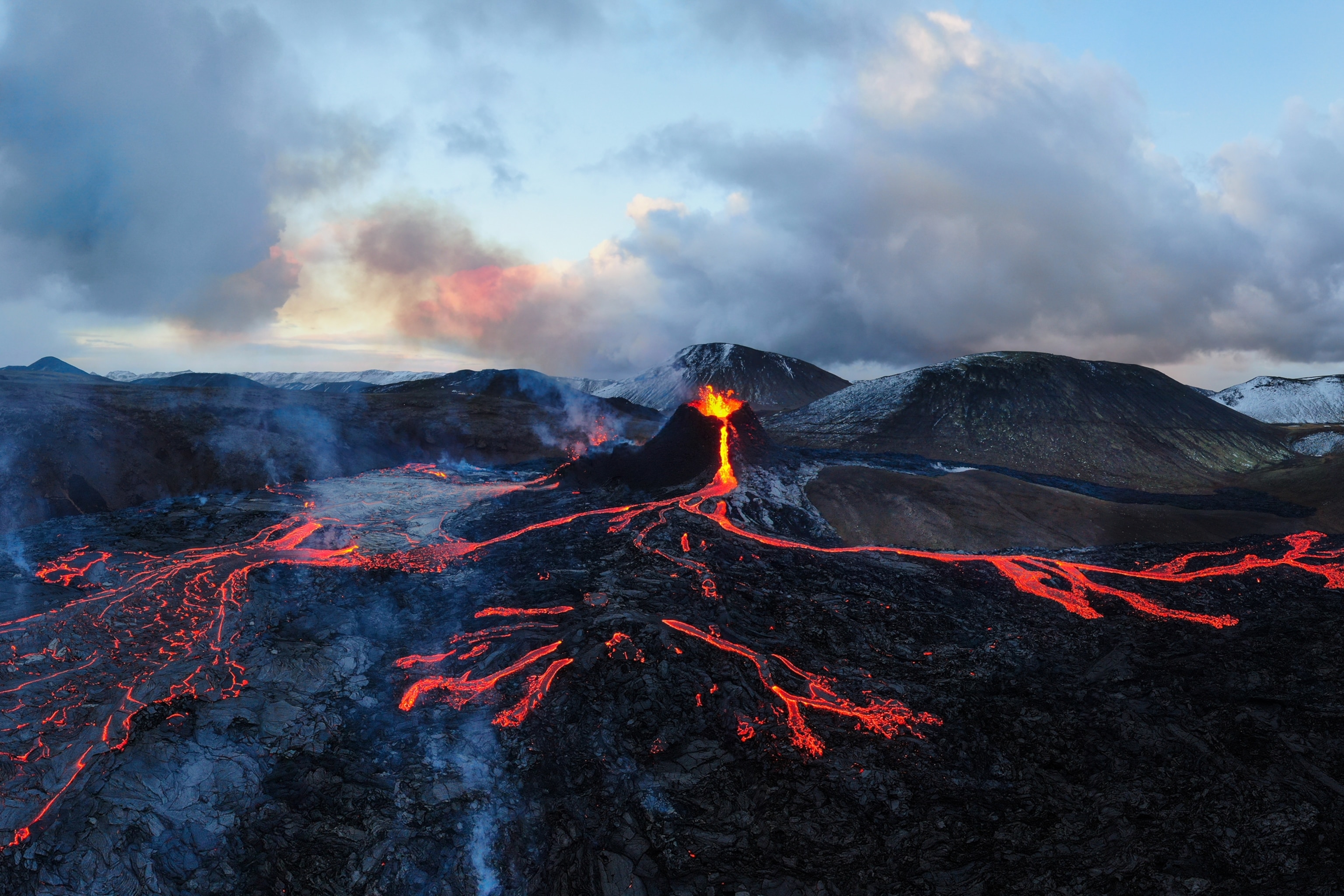 Volcano tourism is booming, but is it too risky?

Dazzling eruptions draw visitors to places like Iceland and Hawaii. Here’s how to see them safely.

Lava flows create a map-like pattern on black basalt rocks at Iceland’s Fagradalsfjall volcano, which erupted in March 2021 for the first time in nearly 800 years.
Assignment

In late March 2021, thousands of people in Iceland hiked into the Geldingadalur valley to watch fiery lava splutter and spill from the crater of the Fagradalsfjall volcano after it erupted for the first time in nearly 800 years. As white ash clouds puffed above trails of glowing, molten rock inching through craggy black stones, some visitors took photos, others sat in quiet awe, and a few toasted marshmallows over the lava flows.

Photographer Chris Burkard, who captured the eruption for National Geographic, was transfixed by the ominous-but-beautiful landscape, too. “It was mesmerizing,” he says. “I never thought something as simple as molten rock would get me this excited.”

The aftermath of eruptions has created famously fertile ground for tourism. Japanese tourists have bunked at onsen ryokans (hot springs inns) in villages near volcanoes since the 8th century. The ruins of the ancient Roman city of Pompeii, preserved by a blanket of ashes when Mt. Vesuvius erupted in A.D. 79, lured countless sightseers on the European Grand Tour in the 17th and 18th centuries.

But the steam, crackle, and pop of active volcanoes has an allure all its own. “They’re one of the most primeval forces of nature that we can observe,” says Benjamin Hayes, chief of interpretation and education for Hawaii Volcanoes National Park on the Big Island. “You feel the power of Mother Earth near this lifeblood of the planet.”

Traveling to an active volcano isn’t without risks and ethical questions. It can be the thrill of lifetime—or a fatal attraction. Before you get fired up to see one, here’s what you should know.

The rise of ‘lava chasers’

In the last decade, volcano tourism has boomed, fueled in part by social media and so-called “lava chasers.” They seek legendary, photogenic smoking spots like Mount Vesuvius (and the other two dozen-plus active volcanic sites on the UNESCO World Heritage List). In the United States, several national parks feature active volcanoes, including Mount Rainier in Washington State, Lassen Peak in California, and the Yellowstone Caldera in Wyoming.

The day after the Island of Hawaii’s Mount Kilauea erupted on December 20, 2020, Hawaii Volcanoes National Park saw a sharp spike in visitors. Many of the 8,000 guests were locals, but the park has also seen a steady increase of out-of-state visitors as COVID-19 travel restrictions ease.

Depending on the place, travelers can take lava boat tours, hop helicopter trips over calderas, surf down the slopes of a volcano, or even walk to the edge of the lava lake. But these endeavors come with risk. Eruptions often produce poisonous gasses (e.g., sulfur dioxide, present at Fagradalsfjall) that can damage your lungs. Between 2010 and 2020, at least 1,143 people have been killed in volcanic explosions, most recently near New Zealand’s Whakaari/White Island volcano, which suddenly erupted December 9, 2019, killing 22 tourists and injuring 25 others.

(Visiting a volcano? Here’s how to stay safe.)

Yet, these casualties seem to have fueled curiosity rather than deterred tourism. Instead of steering clear of erupting volcanoes, sensation seekers are drawn to disaster areas—a trend expected to continue after the pandemic.

Volcanic eruptions happen when there’s an increase in magma-static pressure or a shift in tectonic plates, which can also spur earthquakes. Sometimes, erosion or melting glaciers slowly move the earth and eventually spur eruptions; other times sudden landslides trigger them. Volcanic activities are monitored by scientific observatories around the world, so blow ups are rarely a surprise. (For a bit of armchair volcanology, use the Smithsonian Institution’s online active eruption tracker.)

“If you know some of the basics, you can observe eruptions fairly safely,” says Rosaly M.C. Lopes, a volcanologist and planetary geologist at the Jet Propulsion Laboratory in Pasadena, California. “We’re lucky that the most beautiful eruptions—in Hawaii, Iceland, and Stromboli, Italy—are also not the most explosive ones.”

Author of the Volcano Adventure Guide, Lopes says it’s important to know the type of volcanoes you’re visiting. The volatility of a given site depends on its lava: thin and runny lava flows out of the volcano slowly, while thick and viscous lava makes it difficult for gas to escape, resulting in more explosive (and possibly, deadly) eruptions. Knowing which sort you are dealing with could potentially save your life.

When Italy’s Mount Etna erupted in 1987, two tourists were killed. Lopes was only a mile away on a research trip when it happened. “If it’s a volcano like Etna, and there is a sudden explosion, look up and see where these rock fragments are going to land,” she says. “But you don’t run; you dodge them. And after fragments land, you run.”

On the opposite spectrum, during the sudden eruption of New Zealand’s Whakaari/White Island volcano, Lopes says those who survived were likely the ones who sprinted the fastest. “Some people stayed to take photos. I think some just got caught and couldn’t run fast enough,” she says. “But that is a dangerous volcano, and volcanologists knew it could have a sudden explosion.”

Life in the shadow of a volcano

There are more than 1,500 active volcanoes in 81 countries. For the hundreds of millions of people who reside near them, they’re just a part of daily life, like bad traffic or frequent rain.

(Learn what it’s like to live in beside a volcano.)

The relationship between Sakurajima and the locals is reciprocal. Fertile soil near the volcano helps Kagoshima grow its famed daikon radishes and tiny komikan oranges.

“Without Sakurajima there would be no Kagoshima. It’s the symbol of our city, and the people here view it as a protective god,” says Naoto Maesako, owner of Kagoshima City’s Yogan Yaki restaurant, where vegetables, kurobuta pork, and wagyu beef are cooked on hot plates made from local lava. “We feel that Sakurajima sees us through typhoons and other disasters safely. It’s our history right in front of us, and we can see the same smoldering scene as our ancestors did.”

In Hawaii, the connection between volcanoes and residents is a part of the islands’ origin story. Ancient Hawaiian chants refer to Pele, goddess of volcanoes and fire, as “she who shapes the sacred land.” “The Hawaiian people have been here and have flourished for more than 1,000 years,” says Hayes. “It’s impossible not to be connected deeply with generations of cherished stories, ancestors, and family connection to the ’aina—the land.”

Some volcano tourism veers close to disaster or dark tourism. In 2010, 353 people died and more than 400,000 people lost their homes when Indonesia’s Mount Merapi erupted. Soon after, tour companies popped up specifically to offer excursions to the ash-buried villages. It is an echo of the human casts and imprints at Pompeii, which reveal a terrifying account of the final days of its residents.

(Learn about “dark tourism’’ and why travelers are drawn to disasters.)

In 2018, Mount Kīlauea’s continued eruptions destroyed approximately 600 homes, as well as roads, farms, and ranches, on the Island of Hawaii. That May, while fires still raged in neighborhoods, tourist spending increased by 3.3. percent to $173.9 million. Hospitality companies had to balance meeting traveler’s needs with sensitivity towards affected residents.

Ross Birch, executive director of the Island of Hawaii Visitors Bureau, encourages tourists who are curious about volcanoes to stick to the national park. “It’s a great place to learn about the volcanoes,” Birch says. “Anything outside of that, you might cross into private property and potentially end up in someone’s backyard.”

As Mount Kīlauea continues to erupt, the Island of Hawaii’s Mauna Loa—the world’s largest active volcano—is slowly waking up. Hawaiian Volcano Observatory (HVO) seismometers recorded approximately 223 small-magnitude earthquakes in a span of one week in March of 2021. “The GPS sensors tell us that the ground is changing shape due to the ingress of magma into the storage edifice below the surface,” says HVO geologist Frank Trusdell. “An eruption is not imminent, but residents should start planning.”

Trusdell recalls that within 24 hours of the last Mauna Loa eruption in 1984, plane tickets to the Island of Hawaii were sold out. “Everybody wanted to come to see the eruption,” he says.

Scientists like Trusdell understand why people are drawn to volcanoes, and they believe this helps raise aware and interest in volcanology. “Every time you go somewhere that you see a geological process—even if it’s fairly tame volcanos like Yellowstone geysers—it awakens your curiosity,” says Lopes. “It gives you a much greater respect for our planet.”

Rachel Ng is an award-winning Los Angeles-based travel and culture writer who dreamed of being a volcanologist as a kid. Follow her on Instagram.