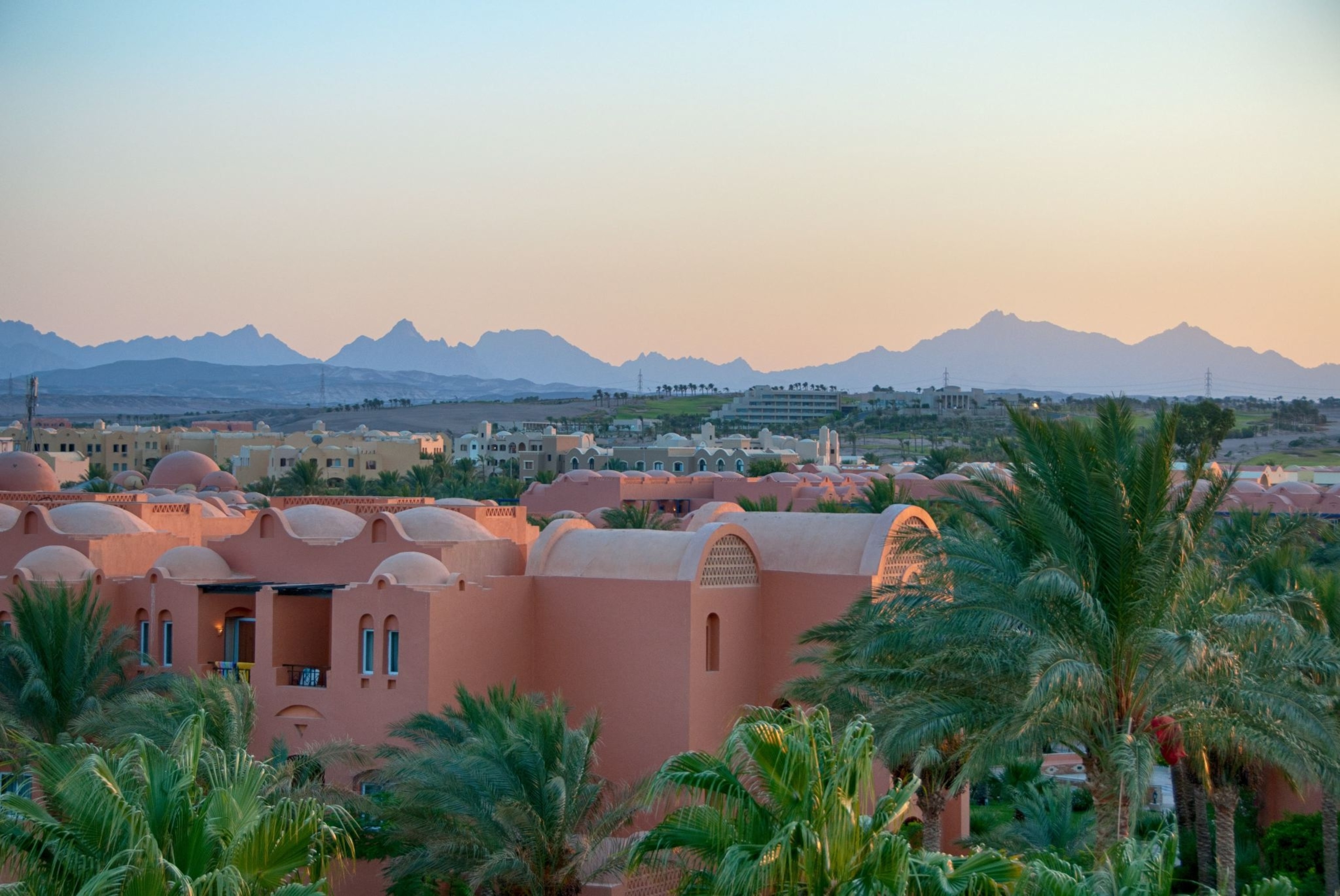 The Middle East may be the next great hiking destination

Several long-distance trails have opened in recent years, shaking up misconceptions about the region and recalling its long history of foot travel.

Near the town of Hurghada, Egypt, the Red Sea Mountain Trail loops through desert peaks and valleys. It’s just one of many long-distance trails in the Middle East.
Photograph by DEZAIN_Junkie, Alamy Stock Photo

The Red Sea Mountains seemed unreachable to Sara Ghenem during her childhood in the Egyptian city of Hurghada. Desert peaks rise beyond the western edge of town, which Ghenem often contemplated from her family’s balcony.

“As a little kid, I was always gazing at them at sunset, saying I wish I could climb that mountain someday,” says Ghenem. “But for a very long time, you could only see them. It was only the Bedouin—the nomads who are living in the desert—who knew how to walk there.”

Years later Ghenem, now a doctor in Cairo, finally ascended the mountains that had loomed so large in her imagination. In 2019 she was part of an inaugural group invited to hike along the newly established 106-mile Red Sea Mountain Trail (RSMT), which winds between the highest peaks in mainland Egypt and is managed by local Bedouin.

The RSMT is mainland Egypt’s first long-distance trail, opening to outsiders an area that few travelers have explored in recent decades. So far, no hiker has been recorded walking the path from beginning to end, but in February 2022, a small group expects to complete the whole trail.

It will be a rugged adventure requiring 10 days of foot travel along steep-sided canyons and high passes. Those who persevere will earn access to granite massifs, acacia-dotted desert, and a tradition of hospitality to rival any on Earth.

This trail is just the latest in a network of walking paths opening across the Middle East. Some, like the RSMT, are community tourism projects that help support local economies and forge bonds between visitors and residents.

Because hiking is “slow travel” in the most literal sense, such journeys point to a more sustainable kind of tourism—and the view from these trails can be life-changing.

Getting hiking boots on the ground

When Ghenem eventually walked into the Red Sea Mountains, she found the landscape infinitely more complex than the view from her balcony. “You look at the mountains from the city, and it looks like an abstract painting, you don’t see any details,” she says. “When you actually go into the desert, you discover it’s a huge network of mountains and valleys.”

“It’s a real kind of granite wilderness—a labyrinth of these mountains,” adds British hiking expert Ben Hoffler, a co-founder of the RSMT who lives in Egypt and wrote Sinai: The Trekking Guide. Footprints are scarce; the ground is etched by tracks of lizards, beetles, and curly-horned Nubian ibex.

The RSMT joins a growing network of long-distance paths spidering across the Middle East’s deserts and mountains. One is the 342-mile Sinai Trail, a sister trail to the RSMT that traces a three-sided circuit through Egypt’s Sinai Peninsula.

Footprints are scarce; the ground is etched by tracks of lizards, beetles, and curly-horned Nubian ibex.

Other walking paths include the 292-mile Lebanon Mountain Trail, established in 2007, and the 205-mile, village-to-village Palestine Heritage Trail, opened in 2014.

More recent is the Jordan Trail, a 404-mile route established in 2017 that crisscrosses the country north to south, sending hikers through a paint-box landscape of rolling olive groves, blooming valleys, and sandy washes. When hikers reach the country’s southwestern desert, they walk right into the Nabatean city of Petra, entering the rock-cut UNESCO site on foot, as travelers have done for thousands of years.

Such trails evoke the Middle East’s long history of foot travel, from ancient camel caravans to pilgrimage routes linking the region’s many religious sites. Fresh paths are being forged even now: In northern parts of Saudi Arabia’s Hejaz region, a new hiking network is expected to launch in the next few years.

When Tony Howard and Di Taylor, veteran hikers and climbers from the United Kingdom, first mapped Jordanian trails in the 1990s, recreational hiking was largely unknown in the region, they say. Many city dwellers in Jordan were leery of the wilderness, asking the pair why they would walk when they could afford to drive instead.

In the years since, local interest in hiking has blossomed. Hiking groups have formed from Riyadh, Saudi Arabia, to Amman, Jordan, where vans packed with eager walkers pour out of the city each Friday morning.

Overcoming stereotypes one step at a time

A growing number of visitors from outside the Middle East have tied on hiking boots to explore the region, too. But, Howard says, some foreigners have misconceptions that the Middle East is simply too risky for such adventures.

There have been some high-profile incidents, such as the 2009 arrest and imprisonment of three American hikers who wandered from Iraq into Iran, and the terrorist bombing of a tourist bus in 2019 near Egypt’s Giza pyramids, but such tragedies are rare.

Hiking has a particular power to bring a richer understanding of the region, says Olivia Mason, a postdoctoral researcher at Newcastle University who studies the geopolitics of walking trails. “When you’re moving foot by foot, and you’re having these everyday encounters where you’re actually speaking with people, these dominant narratives mean nothing, they’re constantly challenged,” says Mason, who has hiked hundreds of miles on the Jordan Trail.

Another common concern is that women won’t be safe hiking in the Middle East. Mason acknowledges that in some areas, it’s still rare to see a woman walking alone.

(This temple honors the Egyptian queen who ruled as king.)

Harassment can be a serious problem in parts of the Middle East, says Hamsa Mansour, an Egyptian documentary filmmaker and adventurer based in Cairo. “It’s very tough to live in Cairo as a woman.”

But Mansour, an avid outdoorswoman who has solo-hiked in both Egypt and Morocco, feels extraordinary freedom while exploring her region’s wild places, in contrast to the challenges of city life. “I never feel safer than when I’m in the mountains,” she says.

Finding hospitality among the peaks

That’s especially true, Mansour says, in the Red Sea Mountains. The RSMT passes through the homeland of the Maaza tribe’s Kushmaan clan, nomadic Bedouin whose livelihoods include foraging in remote corners of the mountain range. Hikers need permission from clan leaders to visit—an age-old custom—and must travel with Kushmaan guides.

“Part of their culture is how much they value, and how much they hold dear, their guests,” says Mansour, who created a short film about the RSMT after hiking there in 2019. Walking alongside Bedouin who knew every plant and animal, she felt profoundly safe.

Exploring with the local guides is a highlight of hiking the Red Sea Mountains, Hoffler believes, because it turns a wilderness experience into a chance to learn about traditional life. “Old ways are still alive,” Hoffler says. “You’re meeting the last guardians of this very ancient nomadic culture.”

Sheikh Merayi Abu Musallem, who leads the Kushmaan clan’s more than 1,500 families, is among those working to preserve that culture. The RSMT offers young members of the clan an opportunity to find work in the mountains, says Musallem, who is a trail co-founder. It’s a livelihood that conserves old knowledge while creating opportunities for sustainable jobs and cultural exchange.

“The path is teaching the young generation a lot of things,” he says. “I am amazed at how quickly the young Bedouin are learning.” Musallem adds that he’d like Kushmaan girls to train as hiking guides, too, a break with tradition that he believes is important.

Learning, he says, is mutual. Hikers from outside the Red Sea Mountain Range—like Ghenem and Mansour—bring their own stories to the campfires where travelers gather after long days on the trail. If they leave the mountains feeling changed by what they encounter there, Musallem says that their Bedouin hosts are transformed by such experiences, too.

“When the guides sit at night and talk after dinner, that’s a benefit. They learn from the visitors, and it’s giving more diversity to the Bedouin,” Musallem says. “We learn the best things on the trail.”