“We worry a lot,” says one Indigenous leader. “They have so much more to tell.”

Guarani Mbya children such as Manuela Vidal are taught their language and culture in public schools, but the pandemic forced the schools to close.

“We worry a lot,” says one Indigenous leader. “They have so much more to tell.”

Eliézer Puruborá, one of the last people to grow up speaking the Puruborá language, died of COVID-19 in Brazil earlier this year. His death at the age of 92 weakened the fragile hold his people have on their language.

Indigenous languages in Brazil have been threatened since the Europeans arrived. Only 181 or so of the 1,500 languages that once existed are still spoken—each mostly by fewer than a thousand people. Some Indigenous groups, especially those with larger populations, such as the Guarani Mbya, have managed to maintain their mother tongue. But the languages of smaller groups, such as the Puruborá, who now number only 220, are on the verge of dying out.

The pandemic is making this tenuous situation worse. There are estimated to be more than 39,000 cases of coronavirus among Indigenous Brazilians, including six among the Puruborá, and as many as 877 deaths. COVID-19 is taking the lives of elders such as Eliézer, who are often the language keepers. The coronavirus also forces isolation on community members, prevents the cultural events that keep languages alive, and undermines the slow progress of language stewardship. (The coronavirus gets dangerously close to the isolated "Arrow People.")

For the Puruborá, preserving their language and culture has been a long struggle. More than a century ago, rubber tappers acting under the auspices of the Indian Protection Services, a federal agency that administered Indigenous affairs, arrived on their land in the Amazonian state of Rondônia. They put Indigenous men and boys, including Eliézer, to work collecting latex from rubber trees and doled out women and girls to non-Indigenous rubber tappers as prizes. Portuguese was the only language allowed to be spoken. (In Brazil, Indigenous people are fighting to keep their children.)

“Everything to do with our culture was forbidden,” says Hozana Puruborá, who became the leader of the Puruborá after her mother Emília died. Emília was Eliézer’s cousin; when they were children, the two cousins, both orphans, whispered to each other in Puruborá when no one else could hear. “They kept their language alive in hiding.”

In 1949, Indian Protection Services declared there were no more Indigenous people in the region because they’d been “mixed” and “civilized.” Officially, the Puruborá had disappeared.

The Puruborá refused to disappear, however. They established Aperoi, the last Puruborá village, a 62-acre parcel of ancestral land they bought from soy and cattle farmers. It isn’t large enough for all their people, so Eliézer lived nearby with his daughter in the town of Guajará Mirim. 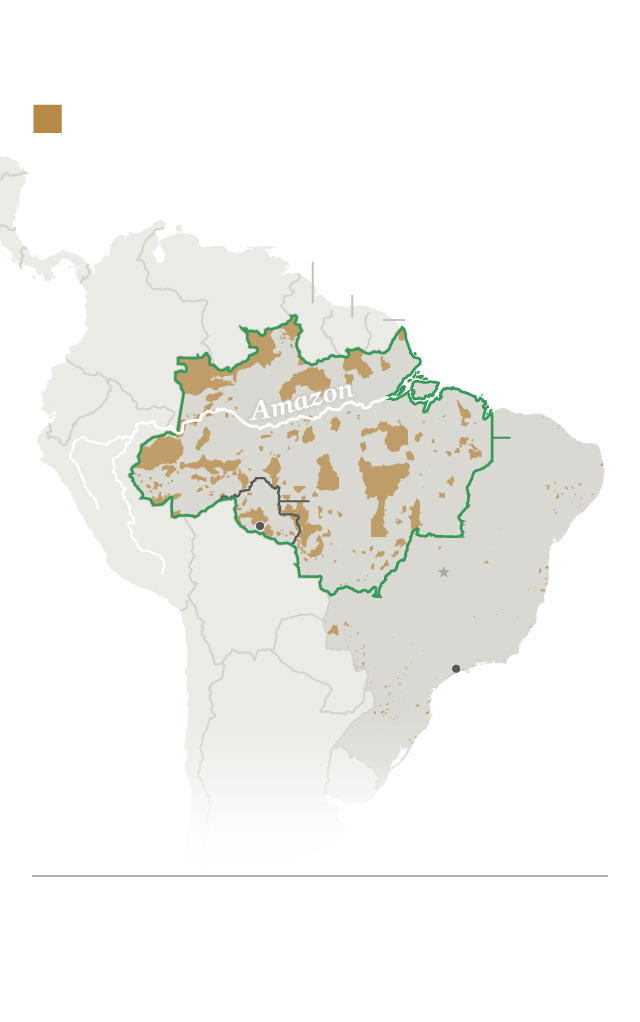 SOURCES: Brazilian Institute of Geography and Statistics, Monitoring of the Andean Amazon Project

The Puruborá also began working with Ana Vilacy Galucio, a linguist from the Emílio Goeldi Paraense Museum, which houses permanent archives of 80 Indigenous languages from the Brazilian Amazon. With their help, she wanted to create an archive for the Puruborá too.

When Galucio began visiting them in 2001, there were nine Puruborá elders, including Eliézer and Emília, who were driven to speak their language again. Many lived far from Aperoi and hadn’t spoken Puruborá in decades.

“It’s not just that they couldn’t speak it,” she says. “They couldn’t hear it; they had no contact with their language.”

Galucio brought them together to talk. They wore headsets and spoke into microphones. Everything they said was recorded to create an audio archive of their language. At first, they could only recall a handful of words. Animal names came easily; grammar and sentence structure were a struggle. But the longer they spoke with each other, the more they remembered.

Now only two semi-fluent elders—Paulo Aporete Filho and Nilo Puruborá—are left. In their 90s and in poor health, both are highly vulnerable to the coronavirus. Neither lives in Aperoi, and no one can visit them because of the pandemic. Hozana worries that COVID-19 could take them before they have time to share all they know.

“A lot is still missing from the archive,” she says. “We worry a lot. They have so much more to tell.”

Far to the south, the pandemic is also buffeting the Guarani Mbya. Hundreds of people in the six villages that make up their community in São Paulo have come down with COVID-19, including elders who are more than 100 years old. So far no one has died.

The community’s public elementary schools, which teach the Guarani language and culture, are closed, leaving children without an important means of learning and sharing. Many people have lost jobs.

But the Guarani language has also received an unexpected boost. When the pandemic hit, Anthony Karai, a young Indigenous leader, started running online language classes as a way to raise money for unemployed community members. He figured he could handle up to 100 students—more than 300 people signed up in two hours. (Traditional Indigenous beliefs are a powerful tool for understanding the pandemic.)

Karai didn’t want to turn anyone away, so he called on two teachers in different villages to take on the extra 200 students. Teaching Guarani, he says, not only gives him a way to keep the language alive but also helps non-Indigenous people see his community in a different light.

“When you learn a language, you can’t just learn the language,” Karai says. “You have to learn the culture.”

The opposite is also true: Losing a language can also mean losing a culture—and that’s what concerns Puruborá teacher Mario Puruborá.

In Aperoi, as in the Guarani Mbya villages, children are taught Puruborá in public school. But even before the pandemic, local authorities wanted to close the school because there were only a handful of students.

Mario, who had been fighting to keep classes going, isn’t fluent in Puruborá. He learned what he knows from the audio recordings Galucio made for the museum’s archive.

Before the pandemic, he depended on regular visits to elders living outside the village, such as Paulo and Nilo, for answers to his questions about the language. The coronavirus has made those trips too dangerous, and now he fears that many linguistic details will die with them.

The Puruborá are doing their best to keep the members of their community safe. They’ve postponed their annual assembly and cultural festival, where they share stories, sing songs, and organize language preservation efforts, and have curtailed non-essential travel. And they say that when the pandemic finally eases, they’ll work to ensure that the responsibility for preserving their culture and language doesn’t fall solely on the frail shoulders of their elders.

“Lots of people say we resurged, but I don’t like that term,” Mario says. “We’ve always known our identity, and we’ve always been here. We always will be.”

This work was supported by the National Geographic Society's COVID-19 Emergency Fund for Journalists.