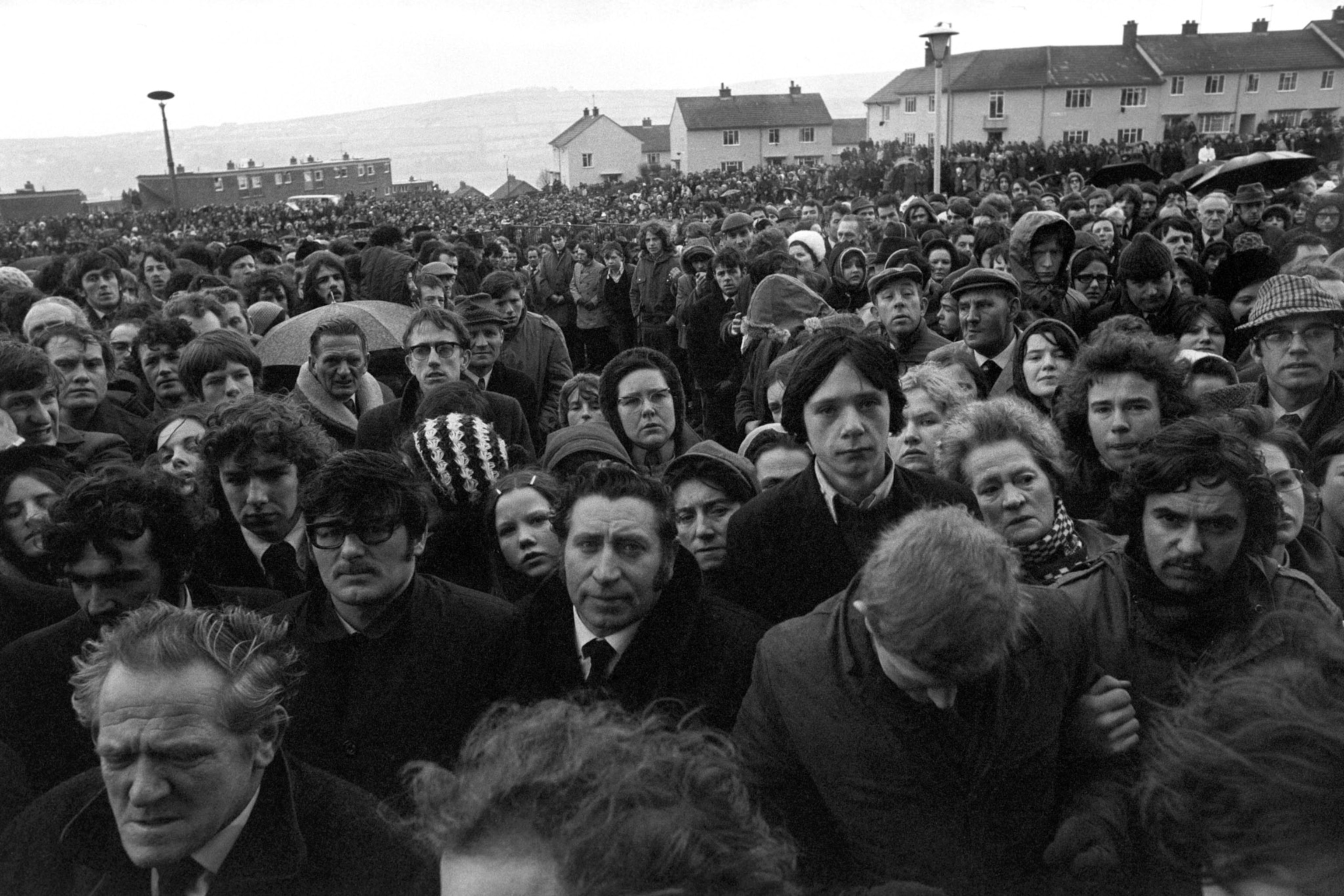 What were the Troubles that ravaged Northern Ireland?

Driven by longstanding enmities between Catholics and Protestants over British rule, the conflict pitted neighbor against neighbor in acts of guerrilla warfare.

The Troubles is a euphemism for the 30-year-long violent conflict that took thousands of lives in Northern Ireland. In this image, a silent crowd lines the road to the cemetery in Derry where the 13 protesters who died in a particularly brutal incident known as Bloody Sunday were buried.
Photograph by PA Images, Getty Images

Olivia O’Hagan tried to keep out of politics. But Northern Ireland’s Troubles had a way of coming to her door. First her sister was abducted and shot. Then her father was shot at for buying property from a Protestant. People all around her were paranoid about being hassled by paramilitaries or dying in random attacks, and O’Hagan had become used to a life of fear.

"You didn’t know who to trust," she recalled in a 2013 oral history. "You just kept yourself to yourself. You didn’t get angry whenever you heard of all the people being shot dead. You just thought ‘When is this ever going to end?’"

She had good reason to wonder. The Troubles—a term long used as a euphemism for violent conflict—brought decades of riots and bloody clashes between pro-British Protestants and Catholics bent on national independence to the doorsteps of people like O’Hagan. Rooted in a legacy of colonialism, religious conflict, and political uncertainty, the Troubles would take 30 years, and thousands of lives, to peter out.

Why Protestants and Catholics clashed in Northern Ireland

The Troubles arose from longstanding grievances between Catholics and Protestants who held deeply opposing views on Northern Ireland’s relationship with Great Britain. A short distance and a long-shared history bound the two nations together, laying the foundation for the conflict.

In its earliest days, Ireland was home to multiple waves of conquerors, including the Celts, Vikings, and Anglo-Saxons. But beginning in 1541, Ireland was ruled by the British crown—and English emigrants soon began to settle in the country’s northern region. Under British rule, the Irish, who were mostly Catholic, had their land confiscated and given to the mostly Protestant settlers.

Animosity between Catholics and Protestants continued, exacerbated by Britain’s use of the island as a colony to be exploited. Over time, an Irish nationalist movement grew, and after decades of brutal fighting, Britain partitioned the country in 1921. Majority-Catholic Ireland gained its independence, and Northern Ireland, billed as "a Protestant state for Protestant people," remained part of the United Kingdom.

But not all Northern Irish people wanted to be associated with the U.K., and the newly created nation was roiled with sectarian violence from the start. Catholics, ruled by Protestant officials who discriminated against them and enforced laws unevenly, pushed for equal treatment and political independence.

During the 1960s, they began to borrow from the American civil rights movement with peaceful protests that, like those in the U.S., were met with brutality. At an October 1968 protest in Londonderry, also known as Derry, where the Catholic working class struggled with poor housing, unemployment, and persistent discrimination, police cracked down and beat protesters. The Troubles had begun.

Catholic nationalists soon redoubled their efforts, holding a march from Belfast to Derry in January 1969 that mirrored Martin Luther King, Jr.’s march to Selma in the U.S. Crowds of loyalists attacked the marchers throughout the protest and ambushed them on the final day at Burntollet Bridge just outside of Derry. The Protestant police did nothing to stop the loyalists even though they used clubs, stones, and other weapons. In response, riots raged throughout Derry.

Soon the Troubles kicked into high gear. Loyalists and nationalists alike marched and brawled. In one August 1969 incident now known as the Battle of the Bogside, a loyalist march from Belfast to Derry was met with protests and barricades. Local Catholic nationalists assailed the loyalists with Molotov cocktails and stones. The days-long riot only died down when British troops were deployed to Derry.

(The history of the Molotov cocktail, an iconic weapon of underdogs.)

Soon, hardline nationalists had organized into a paramilitary group known as the Irish Republican Army (IRA). Its objective: to force Britain to withdraw from Northern Ireland using any means necessary, including violence and guerrilla tactics. Its political arm, Sinn Féin, was devoted to achieving the same goals in the legislature.

In 1971, in response to the rising violence, Northern Ireland’s government instituted a policy of internment without trial and arrested hundreds of IRA members and suspected nationalists.

As the situation deteriorated, the nation’s police force struggled to maintain order. Then, on January 30, 1972, the Troubles took an even darker turn when 15,000 nationalist protesters took to the streets in Derry in defiance of a ban on marches.

The protesters tussled with both the British Army and loyalist counterprotesters—until 21 soldiers fired on the crowd, killing 13 men and injuring others. It was a violent escalation that increased popular support for the IRA and represented Britain’s willingness to silence the nationalists.

Now known as Bloody Sunday, the incident further inflamed anti-British, anti-Protestant sentiment. A tribunal held at the time acquitted both the soldiers and the British Army, but a more recent inquiry revealed that the civilians were shot without warning and had been doing nothing threatening.

The aftermath of Bloody Sunday was widespread chaos on the streets of Northern Ireland, and a breakdown at the nation’s parliamentary level. The U.K. had dithered on how to intervene, but in March 1972 it acted. Northern Ireland’s premier suspended parliament and Britain instituted direct rule.

A long path to peace

The first steps toward peace began in 1973 when Britain, the Republic of Ireland, and a variety of Northern Irish political factions hashed out the Sunningdale Agreement. The deal created a power-sharing arrangement between loyalists and nationalists within the Northern Irish government and instituted a Council of Ireland with representatives from both nations. But the agreement collapsed after a group of loyalists, incensed by what they saw as an invitation for the Republic of Ireland to interfere in Northern Irish affairs, held a general strike that effectively closed down the country.

After the collapse of the Sunningdale Agreement, terrorist and counter-terrorist activity resumed with bombings, street fighting, and other violence erupting regularly. The carnage even reached the royal family; in 1979, members of the IRA blew up the boat of Lord Louis Mountbatten, Queen Elizabeth’s second cousin and Prince Philip’s uncle, assassinating him and killing one of his sons and another passenger.

In the wake of one 1985 IRA hotel bombing intended to assassinate British leaders, Britain and the Republic of Ireland signed the Anglo-Irish Agreement, giving the Republic of Ireland a role in Northern Irish affairs. The agreement improved relations between the countries and opened a path toward Irish reunification. But in Northern Ireland, both the nationalists and loyalists disliked the agreement and violence swelled.

Progress continued to be made at the negotiating table—even as ongoing violence threatened to upend it all. In 1993, British Prime Minister John Major issued a declaration that laid the ground for peace talks, and the IRA and other paramilitary groups declared a ceasefire the following year. But the ceasefire fell apart in the mid 1990s when the British government told the IRA they must completely disarm before joining the peace process. In response, the IRA detonated a massive truck bomb at a London dockyard, wounding a hundred people.

After the shock of the bombing, the British government dropped its demand and allowed the IRA to participate in the peace process. The IRA reinstated its ceasefire in 1997—which would mark the official end to the violence as all parties negotiated in earnest.

Finally, on April 10, 1998, Britain, the Republic of Ireland, and most Northern Irish political parties signed the Good Friday Agreement, which established a power-sharing system of government and made Northern Ireland a devolved state that, while part of the U.K., would have its own legislature and executive. Something else came from the agreement: an all-Irish referendum which voters from both Northern Ireland and the Republic of Ireland ultimately approved.

The legacy of the Troubles

Today, the IRA has disarmed, and power-sharing continues in Northern Ireland. But the brutal conflict still reverberates there. Nearly 4,000 people were killed and more than 47,000 injured throughout the 30-year struggle, most of them young adults.

The history of the conflict is also still being written. For example, one 2019 project revealed the confessions of paramilitaries on both sides, leading to a protracted legal battle. Many perpetrators were never brought to justice, and 16 people are thought to have been kidnapped, murdered, and buried in undisclosed locations by nationalists during the conflict.

The Good Friday Agreement was historic. But many of those whose lives were disrupted by the violence and grief of the Troubles are still alive and contending with the conflict’s gruesome legacy. “You can’t turn it around overnight,” recalled O’Hagan in the oral history. “Every now and again, whenever it raises its head, you sort of say to yourself ‘You know what? We’re really not all that far on.’”