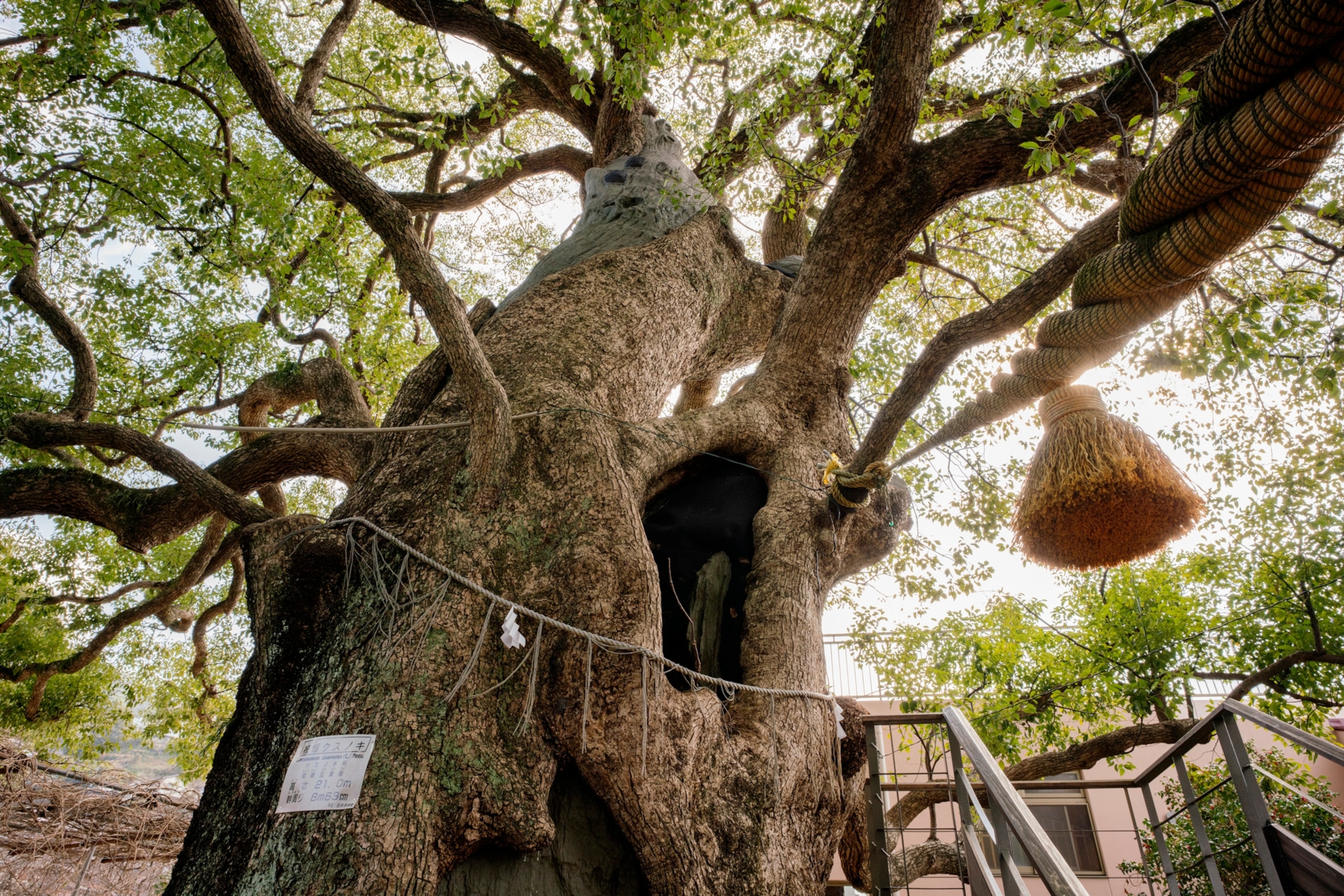 Twists of fate made Nagasaki a target 75 years ago

The Japanese port was not the U.S.'s. first choice for a nuclear attack in August 1945, but shifting circumstances and last-minute choices doomed the city.

Two camphor trees guard the entrance to the Sanno Shinto Shrine roughly a half mile from where the atomic bomb exploded over Nagasaki. Heat and debris from the blast stripped the tree bare and split the trunks in two. Although considered dead at the time, within months new buds emerged from the scorched branches. Today the trees stand as living, natural monuments to the bombing.
Photograph by Hiroki Kobayashi, National Geographic

At two minutes past 11 o’clock in the morning on August 9, 1945, an atomic bomb exploded over the Japanese city of Nagasaki. At that moment, Kazumi Yamada, a 12-year-old paper boy, was finishing up his deliveries and on his way home. Earlier that morning, some friends had gone to a local swimming hole, but Yamada had work to do and did not go with them. Yamada survived the attack on Nagasaki; his friends died from their injuries shortly after the bomb fell.

Such a commonplace choice, to go for a swim versus delivering newspapers, hardly seems like a life or death decision—but that day, it turned out to be. The story of August 9, 1945, in Nagasaki is full of similar moments: near misses and twists of fate that led up to the devastation of the Japanese port, which came close to never becoming the site of the world’s second and last nuclear attack.

In spring 1945, the U.S. military was considering different targets for the first deployment of the atomic bomb that summer. Between April and June, military leaders generated a long list of Japanese cities using three criteria: First, the cities needed to be large, wider than three miles with sizable populations; second, they needed to have “high strategic value,” meaning military installations of some kind; and third, they needed to have escaped the U.S.’s ongoing firebombing campaign begun in March 1945.

Very few areas met all the qualifications; among them were Kyoto, Hiroshima, Kokura, and Niigata. By the end of May 1945, these cities had become the finalists, with Kyoto and Hiroshima being the two primary targets. American B-29s would not firebomb those areas. An intact city would better demonstrate the destructive capacity of the atomic bombs. (Vestiges of the atomic bomb have faded in a now vibrant Hiroshima.)

Nagasaki is nestled between two mountains on the western coast of Kyushu, one of Japan’s five main islands. It’s one of Japan’s oldest port cities and one of the first open to Western trade. Portuguese traders and missionaries arrived there in the 16th century, introducing Catholicism to the city. The faith became popular despite opposition from the emperor, who expelled the foreign missionaries and persecuted local Catholics. Nagasaki’s faithful continued to worship in secret, publicly reclaiming their faith when Japan fully opened up to the West in the 19th century.

Because of its excellent harbor and successful history as an open port, Nagasaki developed a robust shipbuilding industry and thrived as a trading center. During World War II, the city manufactured weapons for the Japanese military. Two munitions factories were located there: the Mitsubishi Steel and Arms Works and the Mitsubishi-Urakami Torpedo Works.

Despite the presence of military targets, Nagasaki was not selected as one of the U.S. target cities in May 1945. It had been on an earlier list in April but had been dropped. The city’s hilly geography and the presence of a POW camp made it a less than ideal target for the atomic bomb, and U.S. officials had four candidate cities that suited their purposes.

Then in early June, Nagasaki’s fortunes changed. U.S. Secretary of War Henry Stimson wanted Kyoto removed from the target list, on the grounds that the city was too culturally significant to the Japanese to be destroyed. Some say his personal fondness for the city—he visited in the 1920s and may have honeymooned there—was the real reason he appealed to President Harry Truman to remove Kyoto from the list.

A replacement was not selected until the day before the official strike orders were issued. On July 24, 1945, a hand-written notation—“and Nagasaki”—appears on a draft of the strike order. It was officially added on July 25. The port city sat at the bottom of the list, its fourth-place position giving it the lowest rank.

Atomic bombs needed to be sited visually rather than relying on radar, which made clear skies necessary. After the bombing of Hiroshima on August 6, 1945, the United States planned to drop the next atomic weapon on August 10, but an extended cloudy forecast meant they had to move more quickly. They switched the attack to August 9, hastily assembled the egg-shaped plutonium bomb “Fat Man,” and loaded it into the B-29 bomber Bockscar. The mission took off from Tinian Island at 3:47 A.M. and flew toward Kokura, the intended target.

Also located on the island of Kyushu, Kokura had been selected because the Japanese Imperial Army’s massive arsenal was there. Bockscar arrived at Kokura around 10 o’clock in the morning, but visibility over the city was poor. Searching for a window in the clouds, the plane circled the city three times, but Kokura never clearly came into view. Around 10:45, the team abandoned Kokura and flew south toward Nagasaki.

When Kazumi Yamada was headed home after his paper route on August 9, second-grader Matsuyoshi Ikeda was at school with his classmates, and 11-year-old Sachiko Matsuo was sheltering with her family outside of town. Earlier that week, her father had evacuated the family because he believed an American attack was coming. Sachiko and some family members were growing restless in the hills and wanted to head home, but her father insisted they stay before he left to go to work in the city that morning.

At 11:02 A.M., their morning was broken by a blinding white flash in the sky. The plutonium bomb dropped by the United States unleashed more than 21 kilotons of firepower, ripping through Nagasaki and killing as many as 70,000 people almost instantly. Ikeda was only one of 47 survivors from his elementary school; 1,400 students were killed, and 50 others were missing. (This book explores how five teenagers survived Nagasaki.)

Thousands more people would die in the coming days and weeks from their injuries and the ravages of radiation poisoning. Matsuo’s father was one of them; she watched him succumb as his hair fell out and his body grew weaker. He died a week after the attack.

The hillsides surrounding Nagasaki contained much of the bomb’s fury, limiting physical devastation to the neighborhoods within the valley. While military targets were damaged and destroyed, the civilian areas close to ground zero were devastated: The bomb consumed people’s homes, local hospitals, colleges and schools, and sacred spaces such as the Sanno Shinto Shrine and the Urakami Cathedral, a Roman Catholic church.

In the 75 years since the attack, Nagasaki has been rebuilt and is once again a flourishing port. Memorials to those lost on August 9, 1945, can be found all over the city. At the Shiroyama Elementary School, a plaque bears the names of Matsuyoshi Ikeda’s fallen classmates.

Descended from Japanese Catholics who were forced to hide their faith, Sachiko Matsuo would later say how witnessing the destruction of the city and of Urakami Cathedral, located just 1,600 feet from ground zero, was devastating. Today the house of worship has been restored, and masses are said there to remember the fallen of August 9, 1945.

The Sanno Shinto Shrine, located about half a mile from the hypocenter, was reduced to ash by the bomb. Burned black and split open, the camphor trees outside it initially were believed lost—but a few years after the blast, new growth began to appear. Today these camphor trees are thriving with a thick canopy of healthy green leaves and tangled branches.

Factors as mercurial as the weather—or where the U.S. Secretary of War vacationed—shaped the destiny of Nagasaki and the people living there. The city’s hibakusha (the Japanese term for survivors of the atomic bombs) have endured a lifetime of obstacles because of choices far beyond their control. (Hiroshima's survivors struggle with memories of the nuclear attack.)

The hibakushas’ lives since that August day, however, have been driven by their own choices. Much like the camphor trees outside the Sanno Shrine, they have come back to life over the past 75 years to tell their stories of that day. Like the trees, the survivors are living examples of both the horrors of nuclear war and the power of resilience.